Earlier today, Genevieve O’Hagan updated Lifeboat readers on this week’s momentous event in Astronomy. At least, I find it fascinating—and so, I wish to add perspective…

30 years ago, astronomer Jack Hills demonstrated the math behind what has become known as the “Hills Mechanism”. Until this week, the event that he described had never been observed.* But his peer astronomers agreed that the physics and math should make it possible…

Hills explained that under these conditions, a star might be accelerated to incredible speeds — and might be even flung out of its galaxy:

If conditions are right, one star ends up orbiting the back hole while the other is jettisoned at incredible speed, yet holding onto its mass and shape. All that energy comes from the gravity of the black hole and the former momentum of the captured star. [20 sec animation] [continue below]

This week, astronomers found clear evidence of this amazing event and traced it back to our galactic center: Five million years ago — as our ancestors learned to walk upright — a star that passed close to the massive black hole at The Milky Way center was flung away at a staggering 6 million Kmh. It is traveling so fast, that it is no longer bound to our galaxy or galactic cluster. It is headed out of the galaxy.

* Prior to this week, astronomers have observed a few stars traveling inexplicably at incredible speeds. But this is the first time, that they have traced the trajectory back to a black hole and the conditions described by Jack Hills. 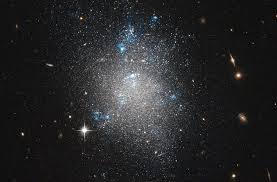 “In its inaugural year of observations, the Dark Energy Survey has already turned up at least eight objects that look to be new satellite dwarf galaxies of the Milky Way.”

The Rocky Mountain chapter of the American Institute of Astronautics & Aeronautics (AIAA) will be having their 2nd Annual Technical Symposium, October 25 2013. The call for papers ends May 31 2013. I would recommend submitting your papers. This conference gives you the opportunity to put your work together in a cohesive manner, get feedback and keep your copyrights, before you write your final papers for journals you will submitting to. A great way to polish your papers.

Here is the link to the call for papers: http://www.iseti.us/pdf/RMAIAA_Call_For_Abstracts_2013-0507.pdf

Here is the link to the conference: http://www.iseti.us/pdf/RMAIAA_General_Advert_2013-0507.pdf

I’ll be presenting 2 papers. The first is a slightly revised version of the presentation I gave at the APS April 2013 conference here in Denver (http://www.iseti.us/WhitePapers/APS2013/Solomon-APS-April(2013-04-15).pdf). The second is titled ‘The Mechanics of Gravity Modification’.

Fabrizio Brocca from Italy wanted to know more about the Ni field shape for a rotating-spinning-disc. Finally, a question from someone who has read my book. This is not easy to explain over email, so I’m presenting the answers to his questions at this conference, as ‘The Mechanics of Gravity Modification’. That way I can reach many more people. Hope you can attend, read the book, and have your questions ready. I’m looking forward to your questions. This is going to be a lively discussion, and we can adjourn off conference.

My intention for using this forum to explain some of my research is straight forward. There will be (if I am correct) more than 100 aerospace companies in attendance, and I am expecting many of them will return to set up engineering programs to reproduce, test and explore gravity modification as a working technology.

Fabrizio Brocca I hope you can make it to Colorado this October, too.

I had a great time at APS 2013 held April 13 — 16, 2013. I presented my paper “Empirical Evidence Suggest A Different Gravitational Theory” in track T10, Tuesday afternoon. A copy of the slides is available at this link.

My apologies to my readers for this long break since my last post of Nov 19, 2012. I write the quarterly economic report for a Colorado bank’s Board of Directors. Based on my quarterly reports to the Board, I gave a talk Are We Good Stewards? on the US Economy to about 35 business executives at a TiE Rockies’ Business for Breakfast event. This talk was originally scheduled for Dec 14, but had moved forward to Nov 30 because the original speaker could not make the time commitment for that day. There was a lot to prepare, and I am very glad to say that it was very well received. For my readers who are interested here is the link to a pdf copy of my slides to Are We Good Stewards?

Now back to interstellar physics and the Kline Directive. Let’s recap.

In my last four posts (2c), (2d), (2e) & (2f) I had identified four major errors taught in contemporary physics. First, to be consistent (2c) with Lorentz-Fitzgerald and Special Theory of Relativity, elementary particles contract as their energy increases. This is antithetical to string theories and explains why string theories are becoming more and more complex without discovering new empirically verifiable fundamental laws of Nature.

Second, (2d) again to be consistent with Lorentz-Fitzgerald and Special Theory of Relativity, a photon’s wave function cannot have length. It must infinitesimally thin, zero length. Therefore, this wave function necessarily has to be a part of the photon’s disturbance of spacetime that is non-moving. Just like a moving garden rake under a rug creates the appearance that the bulge or wave function like envelope is moving.

Third, that exotic matter, negative mass in particular, converts the General Theory of Relativity into perpetual motion physics (sacrilege!) and therefore cannot exist in Nature. Fourth, that the baking bread model (2e) of the Universe is incorrect as our observations of the Milky Way necessarily point to the baking bread model not being ‘isoacentric’.

Einstein (2f) had used the Universe as an expanding 4-dimensional surface of a sphere (E4DSS) in one of his talks to explain how the number of galaxies looks the same in every direction we look. If Einstein is correct then time travel theories are not, as an expanding surface would necessarily require that the 4-dimensional Universe that we know, does not exists inside the expanding sphere, and therefore we cannot return to a past. And, we cannot head to a future because that surface has not happened. Therefore, first, the law of conservation of mass-energy holds as nothing is mysteriously added by timelines. And second, causality paradoxes cannot occur in Nature. Note there is a distinction between temporal reversibility and time travel.

In this E4DSS model, wormholes would not cause time travel but connect us to other parts of the Universe by creating tunnels from one part of the surface to another by going inside the sphere and tunneling to a different part of the sphere. So the real problem for theoretical physics is how does one create wormholes without using exotic matter?