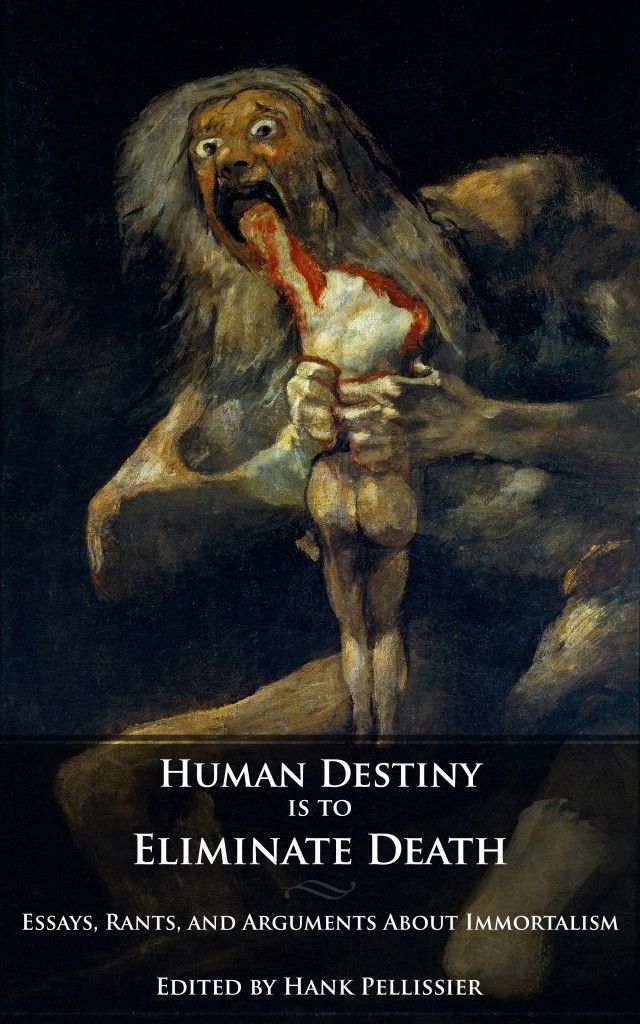 This one-of-a-kind collection features ten debates that originated at ImmortalLife.info, plus 36 articles, essays and diatribes by many of IL’s contributors, on topics from nutrition to mind-filing, from teleomeres to “Deathism”, from libertarian life-extending suggestions to religion’s role in RLE to immortalism as a human rights issue.

The book is illustrated with famous paintings on the subject of aging and death, by artists such as Goya, Picasso, Cezanne, Dali, and numerous others.

The book was designed by Wendy Stolyarov; edited by Hank Pellissier; published by the Center for Transhumanity. This edited volume is the first in a series of quarterly anthologies planned by Immortal Life

Find it on Amazon HERE and on Smashwords HERE

This Immortal Life Anthology includes essays, articles, rants and debates by and between some of the leading voices in Immortalism, Radical Life-Extension, Superlongevity and Anti-Aging Medicine.

Martine Rothblatt Ph.D, MBA, J.D. — inventor of satellite radio, founder of Sirius XM and founder of the Terasem Movement, which promotes technological immortality. Dr. Rothblatt is the author of books on gender freedom (Apartheid of Sex, 1995), genomics (Unzipped Genes, 1997) and xenotransplantation (Your Life or Mine, 2003).

Marios Kyriazis MD, MSc, MIBiol, CBiol. founded the British Longevity Society, was the first to address the free-radical theory of aging in a formal mainstream UK medical journal, has authored dozens of books on life-extension and has discussed indefinite longevity in 700 articles, lectures and media appearances globally.

Maria Konovalenko is a molecular biophysicist and the program coordinator for the Science for Life Extension Foundation. She earned her M.Sc. degree in Molecular Biological Physics at the Moscow Institute of Physics and Technology. She is a co-founder of the International Longevity Alliance.

Mike Perry, PhD. has worked for Alcor since 1989 as Care Services Manager. He has authored or contributed to the automated cooldown and perfusion modeling programs. He is a regular contributor to Alcor newsletters. He has been a member of Alcor since 1984.

Eric Schulke is the founder of the Movement for Indefinite Life Extension (MILE). He was a Director, Teams Coordinator and ran Marketing & Outreach at the Immortality Institute, now known as Longecity, for 4 years. He is the Co-Managing Director of Immortal Life.

Hank Pellissier is the Founder & Senior Editor of ImmortaLife.info. Previously, he was the founder/director of Transhumanity.net. Before that, he was Managing Director of the Institute for Ethics and Emerging Technology (ieet.org). He’s written over 120 futurist articles for IEET, Hplusmagazine.com, Transhumanity.net, ImmortalLife.info and the World Future Society.

Franco Cortese is on the Advisory Board for Lifeboat Foundation on their Scientific Advisory Board (Life-Extension Sub-Board) and their Futurism Board. He is the Co-Managing Director alongside of Immortal Life and a Staff Editor for Transhumanity. He has written over 40 futurist articles and essays for H+ Magazine, The Institute for Ethics & Emerging Technologies, Immortal Life, Transhumanity and The Rational Argumentator.

Brandon King is Co-Director of the United States Longevity Party.

Khannea Suntzu is a transhumanist and virtual activist, and has been covered in articles in Le Monde, CGW and Forbes.

Dick Pelletier is a weekly columnist who writes about future science and technologies for numerous publications.

Joern Pallensen has written articles for Transhumanity and the Institute for Ethics and Emerging Technologies.

1. In The Future, With Immortality, Will There Still Be Children?

2. Will Religions promising “Heaven” just Vanish, when Immortality on Earth is attained?

3. In the Future when Humans are Immortal — what will happen to Marriage?

4. Will Immortality Change Prison Sentences? Will Execution and Life-Behind-Bars be… Too Sadistic?

5. Will Government Funding End Death, or will it be Attained by Private Investment?

6. Will “Meatbag” Bodies ever be Immortal? Is “Cyborgization” the only Logical Path?

7. When Immortality is Attained, will People be More — or Less — Interested in Sex?

8. Should Foes of Immortality be Ridiculed as “Deathists” and “Suicidalists”?

I am an “Aging Fighter” Because Life is the Main Human Right, Demand, and Desire

How Old Are You Now?

Live Long… and the World Prospers

Religion vs. Radical Longevity: Belief in Heaven is the Biggest Barrier to Eternal Life?!

End of Aging: Life in a World where People no longer Grow Old and Die

We Owe Pursuit of Indefinite Life Extension to Our Ancestors

MILE: Guide to the Movement for Indefinite Life Extension

The Real War and Why Inter-Human Wars Are a Distraction

This list of 30 Billionaires — Which One Will End Aging and Death?

People Who Don’t Want to Live Forever are Just “Suicidal”

Eluding the Grim Reaper with 23andMe.com

Sixty Years Old — is my future short and messy, or long and glorious?

Living Forever — the Biggest Fear in the most Audacious Hope

“If Eternal Life is a Medical Possibility, I Will Have It Because I Am A Tech Pirate”