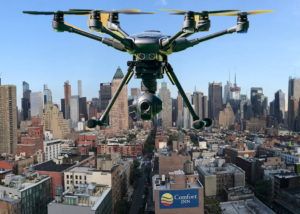 Until this past year, consumer drones carried tiny ultralight cameras, but they just didn’t have the energy or the reserve to carry much else. They certainly could not deliver much of a product or payload. They flew for 15 minutes, lacked the capacity to carry excess weight, and had short range.

But market demand sparks innovation. Amazon and Domino’s Pizza are experimenting with drone delivery. The improvements needed to serve these needs are quickly bubbling down to unlicensed weekend pilots. Hexacopters with 4K cameras, gimbals and retracting landing gear are available for under $400. Tiny foldable drones with 720p cameras are available for $35. Some models don’t even need a pilot on a joystick. You can preprogram the flight path to reach any target using GPS, or you can guide them by making gestures with your hand. The drone actually looks back over its shoulder and responds to your hand-waving commands. 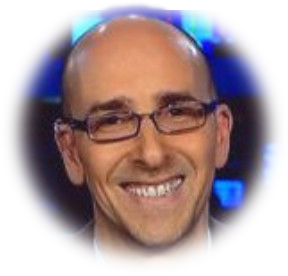 Lance Ulanoff is a cartoonist and robotics fantech expert. But he shares a lot in common with Wild Ducks. He is an eclectic journalist and social media commentator.

This month he began publishing at Medium.com, and I’m glad he did! Lance has a knack for going beyond the Who, What, Why. Even in a short article, he explains the social implications. He provokes us to recognize why it matters.

Lance breaks down the recent attempt to assassinate Venezuela’s president with a drone delivered explosive and raises our social antennae. This news event ushers in a grim technology era. Ulanoff points out that in a short time, it has become inexpensive and fairly easy to send an explosive directly into a national monument like the Statue of Liberty.

Photos: Venezuela President, Nicolás Maduro, reacts to incoming drone. Although the assassination attempt failed, others on the ground were injured.

In our last film, we explored how the introduction of autonomous, self-driving cars is likely to kill a lot of jobs. Many millions of jobs, in fact. But is it short sighted to view self-driving vehicles as economic murderers? Is it possible that we got it totally wrong, and automated vehicles won’t be Grim Reapers — but rather the biggest job creators since the internet?

In this video series, the Galactic Public Archives takes bite-sized looks at a variety of terms, technologies, and ideas that are likely to be prominent in the future. Terms are regularly changing and being redefined with the passing of time. With constant breakthroughs and the development of new technology and other resources, we seek to define what these things are and how they will impact our future.

Self-driving cars are pretty cool. Really, who wouldn’t want to spend their daily commute surfing social media, chatting with friends or finishing the Netflix series they were watching at 4 am the night before? It all sounds virtually utopian. But what if there is a dark side to self-driving cars? What if self-driving cars kill the jobs? ALL the jobs?

In this video series, the Galactic Public Archives takes bite-sized looks at a variety of terms, technologies, and ideas that are likely to be prominent in the future. Terms are regularly changing and being redefined with the passing of time. With constant breakthroughs and the development of new technology and other resources, we seek to define what these things are and how they will impact our future.

The recent scandal involving the surveillance of the Associated Press and Fox News by the United States Justice Department has focused attention on the erosion of privacy and freedom of speech in recent years. But before we simply attribute these events to the ethical failings of Attorney General Eric Holder and his staff, we also should consider the technological revolution powering this incident, and thousands like it. It would appear that bureaucrats simply are seduced by the ease with which information can be gathered and manipulated. At the rate that technologies for the collection and fabrication of information are evolving, what is now available to law enforcement and intelligence agencies in the United States, and around the world, will soon be available to individuals and small groups.

We must come to terms with the current information revolution and take the first steps to form global institutions that will assure that our society, and our governments, can continue to function through this chaotic and disconcerting period. The exponential increase in the power of computers will mean that changes the go far beyond the limits of slow-moving human government. We will need to build new institutions to the crisis that are substantial and long-term. It will not be a matter that can be solved by adding a new division to Homeland Security or Google.

We do not have any choice. To make light of the crisis means allowing shadowy organizations to usurp for themselves immense power through the collection and distortion of information. Failure to keep up with technological change in an institutional sense will mean that in the future government will be at best a symbolic façade of authority with little authority or capacity to respond to the threats of information manipulation. In the worst case scenario, corporations and government agencies could degenerate into warring factions, a new form of feudalism in which invisible forces use their control of information to wage murky wars for global domination.

No degree of moral propriety among public servants, or corporate leaders, can stop the explosion of spying and the propagation of false information that we will witness over the next decade. The most significant factor behind this development will be Moore’s Law which stipulates that the number of microprocessors that can be placed economically on a chip will double every 18 months (and the cost of storage has halved every 14 months) — and not the moral decline of citizens. This exponential increase in our capability to gather, store, share, alter and fabricate information of every form will offer tremendous opportunities for the development of new technologies. But the rate of change of computational power is so much faster than the rate at which human institutions can adapt — let alone the rate at which the human species evolves — that we will face devastating existential challenges to human civilization.

The Challenges we face as a result of the Information Revolution

The dropping cost of computational power means that individuals can gather gigantic amounts of information and integrate it into meaningful intelligence about thousands, or millions, of individuals with minimal investment. The ease of extracting personal information from garbage, recordings of people walking up and down the street, taking aerial photographs and combining then with other seemingly worthless material and then organizing it in a meaningful manner will increase dramatically. Facial recognition, speech recognition and instantaneous speech to text will become literally child’s play. Inexpensive, and tiny, surveillance drones will be readily available to collect information on people 24/7 for analysis. My son recently received a helicopter drone with a camera as a present that cost less than $40. In a few years elaborate tracking of the activities of thousands, or millions, of people will become literally child’s play. END_OF_DOCUMENT_TOKEN_TO_BE_REPLACED