Ironically, my more popular posts are ones furthest from my passion and core interests. They are larks—never intended to go viral. This is about one of them…

Apart from family, I typically steer clear of religious topics. I identify with a mainstream religion, but it is completely beside the purpose of Lifeboat Foundation, and it is a personal affair.[1]

Yet, here we discuss a religious topic, after all. Let’s get started…

Do atheists agree that the fact that we can’t understand
quantum physics is at least somewhat evidence of Allah?

Do you assert that a failure to understand something is evidence of God?

I don’t fully understand a triple-Lutz (ice skating) or the Jessica stitch (needlepoint)—and I certainly don’t get why an electric dryer leaves moisture on light weight linens, when a gas dryer gets them bone-dry before the plush towels.

Is my inability to solve these mysteries evidence of Allah (or Yahweh, haShem or Y’Shewa)? Of course, not! It has nothing to do with God or religion. The fact that I don’t quite grasp every complex task or unexplained science is not evidence of God, it is evidence of my own ignorance.

On the other hand, I am fortunate to understand quantum physics—both academically and from an innate perspective. That is, behavior of waves and matter on a subatomic scale make perfect sense to me.

You would be correct to point out that certain quantum behavior seems to violate common sense:

But these things only seem strange, because we do not experience them first hand given our size and our senses. As the math and the mechanisms are understood through research and experimentation, the behavior begins to fit within physical laws as we understand them. Then, we can extrapolate (predict) other behaviors.

For example, as we begin to understand quantum mechanics, we can design a computer, an encryption mechanism—and eventually a teleportation system—that exploits the physical properties and laws.

1 I do not appreciate the outreach of evangelism. In my opinion, religious discussion is best amongst a like-minded community.

An argument against Evangelism

This isn’t a rant against personal faith. It is a rant against the idea that you should ‘push’ your views on unrelated individuals, especially strangers—even if you believe that your view offers salvation.

Anyone who has lived in a home or apartment, dormed at a college or housed in the military has been approached by well-intentioned Mormons, Jehovah’s Witness, Baptists, Hari Krishna or other evangelicals. I hold nothing against such missionaries. They are marketing conscience and faith in what they see as an act of love. Unfortunately, society is worse off for this type of love. They are horribly misguided. They mean well and they may have the inside track on creation, but their understanding of equality and civil liberties is naïve.

Is this a position of Intolerance? — Quite the opposite!

Even in far off lands, instant communication, air travel and nuclear weapons render our fiefdoms meaningless beyond the realms of taxation, defense, and road repair. We live in a pluralistic melting pot. The shrinking planet demands that we coexist. I have always felt that the only thing of which we can be intolerant is intolerance itself.

So, why do I shun religious outreach? Because, arguing that your book is better than mine can only be won on faith—and faith is both personal and unprovable. Sure, tolerance is often built on religious ideals. To function as a society without killing each other, tolerance is a necessity. But, tolerance and humanity are also built into the Golden Rule and every democratic constitution. Any attempt to persuade others to adopt your core beliefs about origin, doctrine or blasphemy is pointless and an affront to everyone elses’ beliefs.

Whew! It took courage to get that off my chest. I hope that my friend, Hiawatha Bray forgives me.

What about the contradiction between science and religion?

I have never seen any contradiction. Only someone who believes that the Earth was created in the past 6,000 years ago sees a contradiction. That belief is as goofy as the sun orbitting the earth.

If there is a God, then I suppose it explains the energy and matter that surrounds us. And if this is the case, he followed up by proclaiming the finely tuned natural laws of physics and biochemistry, and set everything in motion. Oh rejoice in his splendor! Because, after billions of years, life arose—and we are the interim products of an expanding universe. It’s awe-inspiring, but it certainly presents no contradiction.

I don’t consider myself an atheist. And despite offering an agnostic explanation of the universe, my religion is my business and not yours. But, I certainly believe in science! I side with Bill Nye and the late Carl Sagan (he was my former professor). No one with a sense of their surroundings and an appreciation for facts can ignore that the Earth and the universe have existed for billions of years.

We may be the product of an intelligent God, but if we are, we will never know. We lack to tools to discern the question that predates all other questions. Pointing to ancient scripture is nonsense. The scripture was written by men, seeking to explain everything that they observed in their times. Yet, these men had fewer facts about the universe than we have now. The faith that most believers associate with scripture is based on respect for the practices and beliefs of their parents.

Moreover, the men who created these book (the bibles of any religion), also created God. Why? To deal with mortality, explain tragedy, control the masses—or perhaps as a mental exercise. It may even be a byproduct of what they were ingesting and smoking. 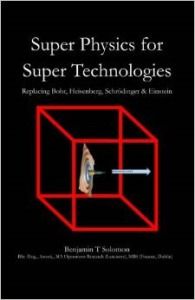 Reviewer’s comments: “Benjamin is the second researcher I have met who has tried to consider a nonsingular cosmology. The first was Christi Stoica, which I met in 2010″.
Andrew Beckwith PhD

The Objective: This book, Super Physics for Super Technologies, proposes that a new physics exists. The findings are based on 16 years of extensive numerical modeling with empirical data, and therefore, both testable and irrefutable.

The Need: In 2012 Prof. Nemiroff, using Hubble photographs, showed that quantum foam cannot exists. In 2013, Solomon showed that both exotic matter and strings could not exists. In 2015 the Kavli Foundation, with Prof. Efstathiou, Prof. Pryke, Prof. Steinhard discussed the issues with the Planck Space Telescope findings of a Universe that is significantly simpler than our theories. Therefore the need for new physics.

The Benefits: The replacement of the Schrödinger wave function with a simpler probabilistic wave function, results in a new electron shell model based on the Rydberg equation, giving exact results with quantum mechanics; leading to a new Standard Model and the unification of photon shielding, transmission and invisibility as the same phenomenon. Solomon’s inference is that any current or future stealth technology can be neutralized.

The Possibilities: Is it possible to rewrite physics and the old great cherished masters? This work is based on extensive numerical modeling of known empirical data and theorizing. Therefore, the answer must be YES.

Acknowledgements: I would like to thank Lockheed for nominating me to the position of Committee Member, Nuclear and Future Flight Propulsion Technical Committee, American Institute of Aeronautics & Astronautics (AIAA)