Complex societies are heavily addicted to expensive, vulnerable and potentially hazardous infrastructure. We rely on a healthy environment for production of food and access to clean water. We depend on technological infrastructure for energy supplies and communications. We are deeply addicted to economic growth to support growing populations and consumption. If one of these pillars of modern society crumbles our existence will collapse like a house of cards.

The interdependencies and complexities of the system we call modern society has become so intertangled that finding a robust and simple solution to our problems has become close to impossible. Historically the cold war gave us the logic of a “balance of terror”. This logic, originally concerned with a balance of U.S. vs. Soviet military capacities, has lead to an increasingly expensive way of reducing risk and ever expanding bureaucracies to keep us “virtually safe”.

With the onset of a global economic recession, drastic climate change, deadly natural disasters, raging civil wars and diminishing natural resources we need a new logic. A set of moral laws for reducing risk and mitigating consequences applicable at a low cost from the bottom up of entire societies.

The concept of resilience is based on the idea that disasters are inevitable and a natural part of existence. Our best defense is preparedness and engineering systems that not only can withstand heavy strains but also absorb damage. The Institute for Resilient Infrastructure at the University of Leeds gives this definition of “Resilience”;

Resilience can also be explained in terms of durability. A durable material, component or system is one which can cope with all the known, predictable loads to which it will be subjected throughout its life. As well as physical loads – stresses and strains – we include environmental loads (e.g. temperature, weather), economic loads (e.g. the scarcity of resources or financial turmoil) and social loads (e.g. changes in legislation or of use, terrorist attack, changes in demography or society’s expectations and demands). 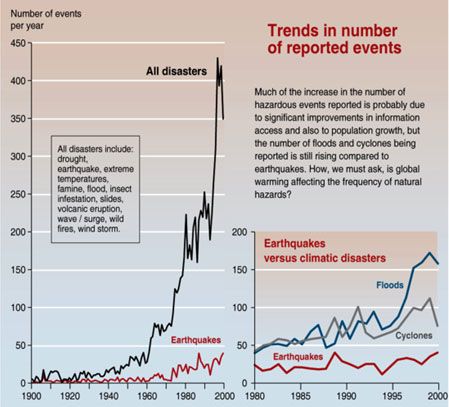 In the 1970s about 100 disasters were recorded worldwide every year. According to the International Disaster Database an average of 392 disasters were reported per year in the last decade. In 2011 we saw record greenhouse gas emissions, melting Arctic sea ice, extreme weather and the earthquake in Japan resulting in the world’s second worst nuclear disaster. Current systems for mitigation of risk are obviously not capable of handling the overwhelming challenges confronting us.

The price tag for disasters in 2011 reached a record high of $265 billion. Most of that cost ($210 billion) came from the tsunami in Japan, but flooding in Australia, tornadoes in the United States and earthquakes in New Zealand contributed substantially. The increasingly turbulent weather patterns wreaking havoc across the planet may only be the beginning of a period of drastic climate change.

In addition to climate change industrial society faces depleted natural resources, degradation of infrastructure and systemic limits to growth. The ongoing economic crisis is a symptom of a deeper structural failure. Governments are running out of options when solving a debt crisis with more debt is the last resort. We rely on short term solutions for long term problems.

We are facing a different type of threat originating from within the system itself, an endogenous and internal failure of our civilizational paradigm. Growing populations stress our dependency on non-renewable resources supported by potentially hazardous nuclear power. The case of the Fukushima nuclear accident illustrates that large population located on limited land is extremely vulnerable to unpredictable events like earthquakes or other catastrophic “wild cards”. From the perspective of risk analysis the state of Japan is a model of the entire planet.

To make the situation even more acute the horizon of Homo Sapiens is full of threats like global pandemics and emerging technologies that could permanently wipe us off the face of the earth. Nanotechnology, synthetic biology and geoengineering hold the promise of a quick fix but also have the potential to cause irreversible harm to the biosphere and human life.

Technology is without a doubt a part of a permanent solution for sustainable life on the planet. The bottom up approach to resilience is about awakening a culture that rewards autonomy and self-sufficiency. Resilience is more than durable engineering. Resilience has to become an obligatory way of thinking and eventually a way of life.

10 robust resilient strategies:
1. Sustain a culture that rewards autonomy and self-sufficiency.
2. Share practical solutions and stockpile resilient ideas instead of canned food.
3. Support intra-generational sharing of knowledge on how to live in accord with nature.
4. Develop alternative economic systems; use Bitcoins and barter when possible.
5. Refine high-tech solutions but favor low tech; HAM radios beat cell phones in emergencies.
6. Grow your own food; become an urban gardener or start a farm revival project.
7. Reduce energy consumption with geothermal energy, local water mills, wind mills and solar panels.
8. Use a condom; think eugenically — act passionately.
9. Keep a gun; if you are forced to pull it – know how to use it.
10. Stay alive for the sake of the next generation.

This article is co-published on Interesting Times Magazine.