Some blogs and news outlets eschew long titles. Publishers want readers to scan a list of topics that fit on one-line each. But, a better title for this article would be:

“Massive electric consumption by cryptocurrency mining:
An unfortunate environmental nightmare will soon pass!
… Proof-of-Work alternatives are on the horizon”

A considerable amount of electricity is used in the process of mining Bitcoin and other cryptocurrencies. Miners are effectively distributed bookkeepers, and this use of resources is part of a system called “proof-of-work”. It keeps the books fair, honest, and without an ability for the miners to collude (In other words, they cannot ‘cook the books’).

What makes the process unique and exciting is that this “distributed consensus” does not require a trusted authority, like a bank. In fact, the whole point of the blockchain revolution is that users trust a mechanism rather than a bank, government or even each other.

But, for any network that hopes to become part of the financial fabric, it must be ubiquitous and in constant motion. Proof-of-work just doesn’t make the grade, because it doesn’t scale. The need for miners to prove that they did something complex sucks up too much power. If Bitcoin or any proof-of-work currency were to be adopted for even a small fraction of commercial and personal transactions, it would overwhelm the world’s energy services.

One reader suggests the problem will be solved by the recent boom in shale fracking and renewable, non-polluting energy. He points out that crypto mining may even drive a market for distributed, clean electric production.

Unfortunately, clean and cheap power makes the problem worse. Even if electric capacity were to rise dramatically and experience a great cost reduction, cryptocurrency networks would automatically demand all the extra electricity. It is a no-win game, because mining incentives escalate with an increase in supply or drop in cost.

Will large-scale, blockchain-based networks fail, because of enormous electric demand? Fortunately, the future is not so bad, after all. Although networks, like Bitcoin, currently use proof-of-work to ensure honesty and fairness, it is only one of many possible measurement and enforcement mechanisms. Eventually, developers and miners will swap in another proof mechanism to keep the network humming—and without creating an environmental catastrophe.

Will Change in Proof Come in Time?

The political process for changing the fairness mechanism (“forking the code”) is complex and fraught with infighting, but the problem will eventually be addressed, and it will be solved before electricity becomes a critical issue. Despite a messy voting process, the miners have too much at stake to ignore this problem much longer.

Various proof alternatives are already being used in altcoins. Since Bitcoin is perfectly free to steal these techniques (none can be protected by patent or trade secrecy), we can think of these other coins as beta-tests for Bitcoin. How so? As the first and biggest elephant in the room, Bitcoin will likely reign supreme, as long as it doesn’t wait too long before grabbing the best technology and tucking it into its quiver.

These aren’t the only alternatives to proof-of-work. Ultimately, one or more of these fairness enforcement mechanisms will make its way into Bitcoin and other currencies and blockchain services. In my opinion, the electrical crisis is a genuine threat, but it is one that with a solution that will be implemented soon—perhaps even this year.

At the heart of Bitcoin or any Blockchain ledger is a distributed consensus mechanism. It’s a lot like voting. A large and diverse deliberative community validates each, individual user transaction, ownership stake or vote.

One problem that has made news in the Bitcoin word is the geographical concentration of miners and mining pools.

A distributed or decentralized transaction validation is typically achieved based on Proof-of-Work (POW) or Proof-of-Stake (POS). [explain]. But in practice, these methodologies exhibit subtle problems…

The problem is that Proof-of-Work can waste an enormous amount of energy and both techniques result in a concentration of power (either by geography or by special interest) — rather than a fair, distributed consensus.

In a quasi-formal paper, C.V. Alkan describes a fresh approach to Blockchain consensus. that he calls Distributed Objective Consensus. As you try to absorb his mechanism, you encounter concepts of Sybil attacks, minting inequality, the “nothing-at-stake” 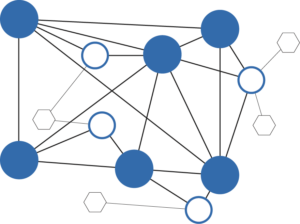 problem, punishment schemes and heartbeat transactions. Could Alkan’s distributed consensus mechanism be too complex for the public to understand or use?…

While I have a concern that time stamps and parent-child schemes may degrade user anonymity, the complexity doesn’t concern me. Alkan’s paper is a technical proposal for magic under the covers. Properly implemented, a buyer and seller (and even a miner) needn’t fully understand the science. The user interface to their wallet or financial statement would certainly be shielded from the underlying mechanics.

Put another way: You would not expect a user to understand the mechanism any more than an airline passenger understands the combustion process inside a jet engine. They only want to know:

So will Alkan’s Decentralized Objective Consensus solve the resource and concentration problems that creep into POW and POS? Perhaps. At first glance, his technical presentation appears promising. I will return to explore the impact on privacy and anonymity, which is my personal hot button. It is a critical component for long term success of any coin transaction system built on distributed consensus. That is, forensic access and analysis of a wallet or transaction audit trail must be impossible without the consent and participation of at least one party to a transaction.

Philip Raymond co-chairs CRYPSA and The Bitcoin Event. He is a Lifeboat board member, editor
at AWildDuck and will deliver the keynote address at Digital Currency Summit in Johannesburg.

Research can seem bland to us laypersons. But, Marko Vukolić shares many of my research interests and he exceeds my academic credentials (with just enough overlap for me to understand his work). So, in my opinion, his writing is anything but bland… 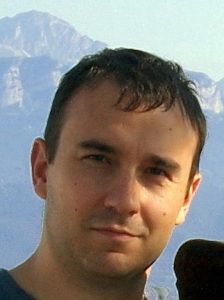 Vukolić started his career as a post-doc intern at IBM in Zurich Switzerland. After a teaching stint as assistant professor at Eurecom and visiting professor at ETH Zurich, he rejoined the IBM research staff in both cloud computing infrastructure and the Blockchain Group.*

As a researcher and academic, Vukolić is a rising star in consensus-based mechanisms and low latency replicated state machines. At Institut Mines-Télécom in Paris, he wrote papers and participated in research projects on fault tolerance, scalability, cloud computing and distributed trust mechanisms.

Now, at IBM Zurich, Vukolić has published a superior analysis addressing the first and biggest elephant in the Bitcoin ballroom, Each elephant addresses an urgent need: 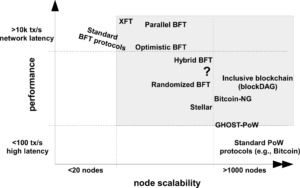 Regarding the first elephant, scalability, Bitcoin urgently needs to grow its Blockchain dynamics into something that is living and manageable. To that end, Vukolić refers to a transaction bookkeeping mechanism that works as a “fabric”. That is, it does not require every miner to access the history-of-the-world and append each transaction onto the same chain in serial fashion. Rather than growing an ever bigger blockchain—with ever bigger computers—we need a more 3D approach that uses relational databases in a multi-threaded, transactional environment, while still preserving the distributed, p2p trust mechanisms of the original blockchain.

While clearly technical, it is a good read, even for lay enthusiasts. It directly relates to one of the elephants in the room.

I have pasted Marko’s Abstract below. The full paper is 10½ pages (14 with references).

Bitcoin cryptocurrency demonstrated the utility of global consensus across thousands of nodes, changing the world of digital transactions forever. In the early days of Bitcoin, the performance of its probabilistic proof-of-work (PoW) based consensus fabric, also known as blockchain, was not a major issue. Bitcoin became a success story, despite its consensus latencies on the order of an hour and the theoretical peak throughput of only up to 7 transactions per second.

The situation today is radically different and the poor performance scalability of early PoW blockchains no longer makes sense. Specifically, the trend of modern cryptocurrency platforms, such as Ethereum, is to support execution of arbitrary distributed applications on blockchain fabric, needing much better performance. This approach, however, makes cryptocurrency platforms step away from their original purpose and enter the domain of database-replication protocols, notably, the classical state-machine replication, and in particular its Byzantine fault-tolerant (BFT) variants.

* Like Marko, Blockchains, Cloud computing, and Privacy are, also my primary reserach interests, (GMTA!). But, I cede the rigorous, academic credentials to Marko.

Related—and recently in the news:

Raymond co-chairs CRYPSA and The Bitcoin Event. A columnist & board member at Lifeboat Foundation
he edits AWildDuck. He will deliver the keynote address at Digital Currency Summit in Johannesburg.