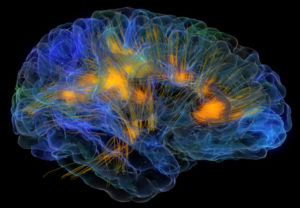 New research shows that the brain‘s neuroplasticity isn’t as flexible as previously thought.

One of the brain’s mysteries is how exactly it reorganizes new #information as you learn new tasks. The standard to date was to test how neurons learned new behavior one #neuron at a time.

Carnegie Mellon University and the University of Pittsburgh decided to try a different approach. They looked at the population of neurons to see how they worked together while #learning a new behavior. Studying the intracortical population activity in the primary motor cortex of rhesus macaques during short-term learning in a brain–computer interface (BCI) task, they were able to study the reorganization of population during learning.

Their new research indicates that when the brain learns a new activity that it is less flexible than previously thought. The researchers were able to draw strong hypothesis about neural reorganization during learning by using BCI. Through the use of BCI the mapping between #neural activity and learning is completely known

“In this experimental paradigm, we’re able to track all of the neurons that can lead to behavioral improvements and look at how they all change simultaneously,” says Steve Chase, an associate professor of biomedical engineering at Carnegie Mellon and the Center for the Neural Basis of Cognition.

“When we do that, what we see is a really constrained set of changes that happen, and it leads to this suboptimal improvement of performance. And so, that implies that there are limits that constrain how flexible your brain is, at least on these short time scales.”

It is often challenging to learn new tasks quickly that require a high level of proficiency. Neural plasticity is even more constrained than previously thought as results of this research indicate.

“None of us predicted this outcome,” says Matthew Golub, a postdoctoral researcher in electrical and computer engineering at Carnegie Mellon. “Learning is far more limited on the scale of a few hours than any of us were expecting when we started this. We were all surprised that the brain wasn’t able to choose the best strategy possible.”

The research was done in collaboration with the Center for Neural Basis of Cognition, a cross university research and educational program between Carnegie Mellon and the University of Pittsburgh that leverages each institution’s strengths to investigate the #cognitive and neural mechanisms that give rise to biological intelligence and behavior.

Twenty years ago, way back in the primordial soup of the early Network in an out of the way electromagnetic watering hole called USENET, this correspondent entered the previous millennium’s virtual nexus of survival-of-the-weirdest via an accelerated learning process calculated to evolve a cybernetic avatar from the Corpus Digitalis. Now, as columnist, sci-fi writer and independent filmmaker, [Cognition Factor — 2009], with Terence Mckenna, I have filmed rocket launches and solar eclipses for South African Astronomical Observatories, and produced educational programs for South African Large Telescope (SALT). Latest efforts include videography for the International Astronautical Congress in Cape Town October 2011, and a completed, soon-to-be-released, autobiography draft-titled “Journey to Everywhere”.

Cognition Factor attempts to be the world’s first ‘smart movie’, digitally orchestrated for the fusion of Left and Right Cerebral Hemispheres in order to decode civilization into an articulate verbal and visual language structured from sequential logical hypothesis based upon the following ‘Big Five’ questions,

Even if you believe that imagination is more important than knowledge, you’ll need a full deck to solve the ‘Arab Spring’ epidemic, which may be a logical step in the ‘Global Equalisation Process as more and more of our Planet’s Alumni fling their hats in the air and emit primal screams approximating;
“we don’t need to accumulate (so much) wealth anymore”, in a language comprising of ‘post Einsteinian’ mathematics…

Good luck to you if you do…