‘Let there be light,’ said the Cgi-God, and there was light…and God Rays.

We were out in the desert; barren land, and our wish was that it be transformed into a green oasis; a tropical paradise.

And so our demigods went to work in their digital sand-boxes.
Then, one of the Cgi-Gods populated the land with Dirrogates –Digital people in her own likeness.

Welcome to the world… created in Real-time.

A whole generation of people are growing up in such virtual worlds, accustomed to travelling across miles and miles of photo-realistic terrain on their gaming rigs. An entire generation of Transhumans evolving (perhaps even un-known to them). With each passing year, hardware and software under the command of human intelligence, gets even closer to simulating the real-world, down to physics, caustics and other phenomena exclusive to the planet Earth. How is all this voodoo being done?

All output in the video above is in real-time and from a single modern gaming PC. That’s right…in case you missed it, all of the visuals were generated in real-time from a single PC that can sit on a desk. The “engine” behind it, is the CryEngine 3. A far more customized and amped up version of this technology called Cinebox is a dedicated offering aimed at Cinematography. It will have tools and functions that film makers are familiar with. It is these advances in technology… these tools that film-makers will use, that will acclimatize us to the virtual world they build with human performance capture and digital assets; laser scanned pointclouds of real-world architecture… this is the technology that will play its part and segue us into Transhumanism, rather than a radical crusade that will “convert” humanity to the movement. 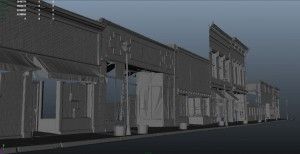 Laser scanned buildings and even whole neighborhood blocks are now common place in large budget Hollywood productions. A detailed point cloud needs massive compute power to render. Highend Game Engines when daisy chained can render and simulate these large neighborhoods with realtime animated atmosphere, and populate the land with photo-realistic flora and fauna. Lest we forget… in stereoscopic 3D, for full immersion of our visual cortex.
Game Engines have powerful and advanced TOD (time of day) editors. Now imagine if a TOD editor module and a weather system could pull data such as wind direction, temperature and weather conditions from real-world sensors, or a real-time data source.
If this could be done, then the augmented world running on the Game Engine could have details such as leaves blowing in the correct direction. See the video above at around the 0.42 seconds mark for a feeler of what I’m aiming for.
Also: The stars would all align and there would be no possible errors in the night sky, of the virtual with the real, though there would be nothing stopping “God” from introducing a blue moon in the sky.
At around the 0:20 second mark, the video above shows one of the “Demi-Gods” at work: populating Virtual Earth with exotic trees and forests… mind-candy to keep an uploaded mind from home-sickness. As Transhumans, either as full mind uploads or as augmented humans with bio-mechanical enhancements or indeed, even as naturals, it is expected that we will augment the real world with our dreams of a tropical paradise — Heaven, can indeed be a place on Earth.

We were tired of our mundane lives in an un-augmented biosphere. As Transhumans, some of us booted up our mind-uploads while yet others ventured out into the desert of the real world in temperature regulated nano-clothing, experiencing a tropical paradise… even as the “naturals” would deny it’s very existence.

Recently, scientists have said we may really be living in a simulation after all. The Mayans stopped counting time not because they predicted Winter Solstice 2012 would be the end of the world… but it might be because they saw 2013 heralding the dawn of a new era. An era that sees the building blocks come into place for a journey heading into eventual…‘Singularity’

Dir·ro·gate : A portmanteau of Digital + Surrogate. Borrowed from the novel “Memories with Maya“
Authors note: All images, videos and products mentioned are copyright to their respective owners and brands and there is no implied connection between the brands and Transhumanism.