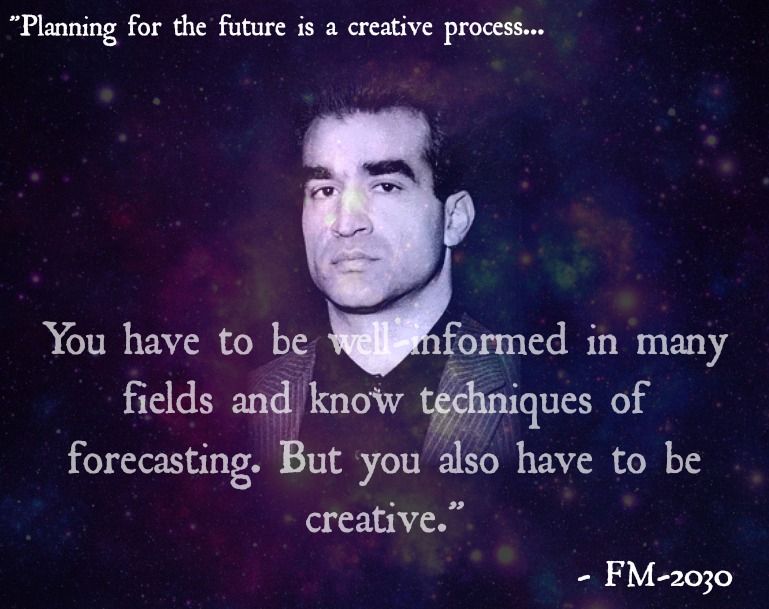 One of the major aspects that can make or break a creative person according to FM-2030 is the environment. In his book “Are You A Transhuman?”, he asks the reader to grade their own surroundings: “Does your home environment stimulate innovation — cross fertilization — initiative?”

We bet you can see where this is going.

The answers are, once more, “Often, Sometimes, or Hardly Ever”, with “Often being the answer choice that gives you the most points — another 2 to tally up to your score if you’re already proving to be more transhumanist that you thought. It might seem obvious, but it’s true — environment can play a major role in the stimulation of creativity. FM says that “It is difficult to be precise about creativity — how much of it is inherited and how much is learned.” If an environment is one that “encourages free unrestricted thinking… encourages people to take initiatives… open and ever-changing”, it is a dynamic environment that can stimulate creativity in an individual.

People who work with telecommunications are susceptible to views that are far different than their own, and the sciences, though structured, force a person to think creatively to find answers. By the same token, people who have a good balance of leisure time and work are also cultivating a greater internal environment to stimulate creativity. And in case you were forgetting the reason creativity is important to FM-2030, perhaps take a look at his quote that sums up the chapter perfectly, below.

This archive file was compiled from an interview conducted on the campus of Singularity University, February 2013. The interview took place at a time where new artificial intelligence systems, such as IBM’s Jeopardy winning “Watson,” were re-awakening the popular imagination in terms of artificial intelligence becoming a visible part of day to day life. The privacy issues regarding the ‘big-data’ that allowed many AI systems to function was also becoming a significant source of controversy. In this piece, Marty Kohn, MD, chief medical scientist on the IBM Watson Medical Team, gives insight into his personal thoughts and feelings regarding how society might both accept and reject the artificial intelligence advances of the coming years.

About the Speaker:
IBM:
researcher.ibm.com/researcher/view.php?person=us-marty.kohn

This archive file was compiled from an interview conducted at the Googleplex in Mountain View, California, 2013.

As late as the 1980s and the 1990s, the common person seeking stored knowledge would likely be faced with using an 18th century technology — the library index card catalogue — in order to find something on the topic he or she was looking for. Fifteen years later, most people would be able to search, at any time and any place, a collection of information that dwarfed that of any library. And unlike the experience with a library card catalogue, this new technology rarely left the user empty-handed.

Information retrieval had been a core technology of humanity since written language — but as an actual area of research it was so niche that before the 1950s, nobody had bothered to give the field a name. From a superficial perspective, the pioneering work in the area during the 1940s and 50s seemed to suggest it would be monumentally important to the future — but only behind the scenes. Information retrieval was to be the secret tool of the nation at war, or of the elite scientist compiling massive amounts of data. Increasingly however, a visionary group of thinkers dreamed of combining information retrieval and the ‘thinking machine’ to create something which would be far more revolutionary for society.

In the case of Google’s Amit Singhal, it was a childhood encounter with a visionary work that gave him his initial fascination with the dream of the thinking machine — a fascination that would result in his evolution to be one of the individuals who began to transform the dream into a reality. The work that he encountered was not that of a scientific pioneer such as Alan Turing or Marvin Minsky — it was a visionary work of pop culture.