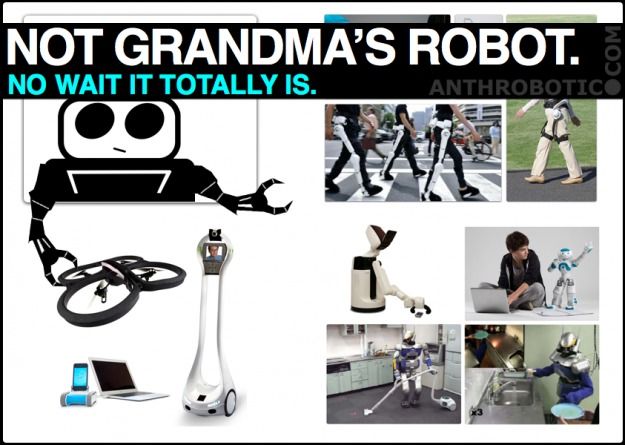 Japanese People are Getting Old — Fast. So… Robots!
Japan is one of those great examples of how, when a society reaches a certain stage of development, population can stabilize itself based simply on quality of life (economic well-being, healthcare, community, Golden Rule morality, etc.). There is a challenge, however: population decline. In arguably one of the world’s most advanced capitalist nations, where 70% of GDP is based on the services economy and nearly all national debt is public held, a big die-off is… big problematic. Sure, the population decline will be gradual — but it’s inexorable, and Japan has to prepare now.

But actually, whether a large segment of the youth truly don’t want to make sweet love, or do, it doesn’t change the fact that Japan’s going to be running out of people. Factor in a rising women’s liberation, the destigmatization of birth control, and perceived economic instability — who knows what the actual equation looks like, but the answer is a birthrate of 1.39. And in case it’s not obvious, a birthrate of at least 2 is a replacement set for the parents; a population at stasis. Ain’t happening.

So, at the end of the day, replacing the lost population with robots, thereby replacing a lost labor force and augmenting the consumer economy — well, seems like a decent enough course of action.

Three States of Robot Assimilation:
Hop on over to Akihabara News to have a look at the sharing, the wearing, and the caring: Dear Assistive Robot Industry, We Need You. Sincerely, Rapidly Aging Japan.

Lastly, you kinda have to wonder: in the macro, why don’t they want sex AND robots?
Japan, sometimes you so cray. 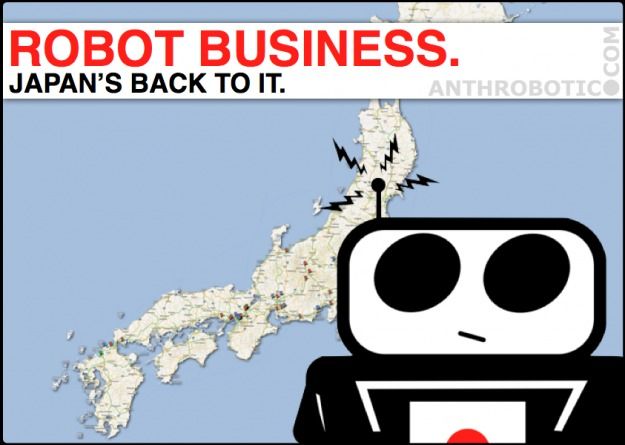 Fukushima’s Second Anniversary…
Two years ago the international robot dorkosphere was stunned when, in the aftermath of the Tohoku Earthquake and Tsunami Disaster, there were no domestically produced robots in Japan ready to jump into the death-to-all-mammals radiation contamination situation at the down-melting Fukushima Daiichi nuclear power plant.

…and Japan is Hard at Work.
Suffice it to say, when Japan finds out its robots aren’t good enough — JAPAN RESPONDS! For more on how Japan has and is addressing the situation, have a jump on over to AkihabaraNews.com.

Oh, and here’s some awesome stuff sourced from the TheRobotReport.com: 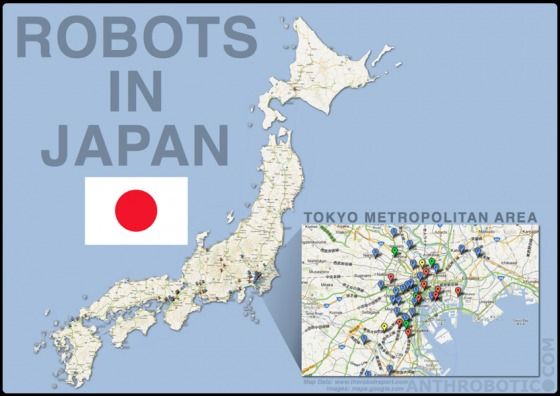 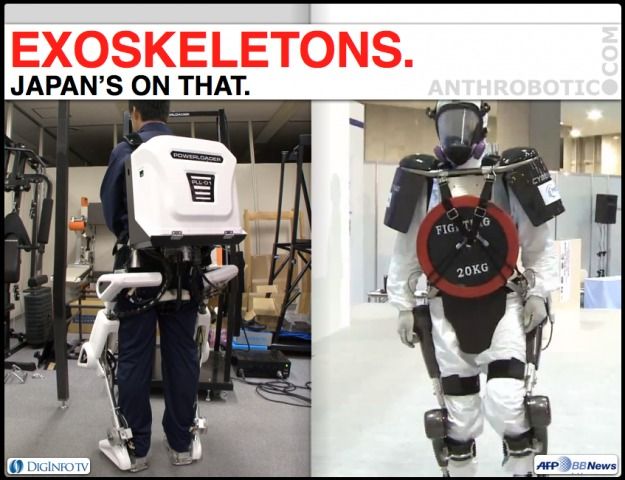 Joining HAL and a few similar projects here in Japan (notably Toyota’s & Honda’s) is Kansai based & Panasonic-owned Activelink’s new Power Loader Light (PLL). Activelink has developed various human force amplification systems since 2003, and this latest version of the Loader looks a lot less like its big brother the walking forklift, and a lot more like the bottom half & power pack of a HAL suit. Activelink intends to connect an upper body unit, and if successful, will become HAL’s only real competition here in Japan.
And for what?

Well, along with general human force amplification and/or rehab, this:

Fukushima Cleanup & Recovery: Heavy with High-Rads
As with Cyberdyne’s latest radiation shielded self-cooling HAL suit (the metallic gray model), Activelink’s PLL was ramped up after the 2011 Tohoku earthquake, tsunami, and resulting disaster at the Fukushima Daiichi Power Plant. Cleanup at the disaster area and responding to future incidents will of course require humans in heavy radiation suits with heavy tools possibly among heavy debris.While specific details on both exoskeletons’ recent upgrades and deployment timeline and/or capability are sparse, clearly the HAL suit and the PLL are conceptually ideal for the job. One assumes both will incorporate something like 20-30KG/45-65lbs. per limb of force amplification along with fully supporting the weight of the suit itself, and like HAL, PLL will have to work in a measure of radiological shielding and design consideration. So for now, HAL is clearly in the lead here.

Exoskeleton Competition Motivation Situation
Now, the HAL suit is widely known, widely deployed, and far and away the most successful of its kind ever made. No one else in Japan — in the world — is actually manufacturing and distributing powered exoskeletons at comparable scale. And that’s awesome and all due props to Professor Sankai and his team, but in taking stock of the HAL project’s 8 years of ongoing development, objectively one doesn’t see a whole lot of fundamental advancement. Sure, lifting capacity has increased incrementally and the size of the power source & overall bulk have decreased a bit. And yeah, no one else is doing what Cyberdyne’s doing, but that just might be the very reason why HAL seems to be treading water — and until recently, e.g., Activelink’s PLL, no one’s come along to offer up any kind of alternative.

Digressively Analogizing HAL with Japan & Vice-Versa Maybe
What follows is probably anecdotal, but probably right: See, Japanese economic and industrial institutions, while immensely powerful and historically cutting-edge, are also insular, proud — and weirdly — often glacially slow to innovate or embrace new technologies. With a lot of relatively happy workers doing excellent engineering with unmatched quality control and occasional leaps of innovation, Japan’s had a healthy electronics & general tech advantage for a good long time. Okay but now, thorough and integrated globalization has monkeywrenched the J-system, and while the Japanese might be just as good as ever, the world has caught up. For example, Korea’s big two — Samsung & LG — are now selling more TVs globally than all Japanese makers combined. Okay yeah, TVs ain’t robots, but across the board competition has arrived in a big way, and Japan’s tech & electronics industries are faltering and freaking out, and it’s illustrative of a wider socioeconomic issue. Cyberdyne, can you dig the parallel here?

Back to the Robot Stuff: Get on it, HAL/Japan — or Someone Else Will
A laundry list of robot/technology outlets, including Anthrobotic & IEEE, puzzled at how the first robots able to investigate at Fukushima were the American iRobot PackBots & Warriors. It really had to sting that in robot loving, automation saturated, theretofore 30% nuclear-powered Japan, there was no domestically produced device nimble enough and durable enough to investigate the facility without getting a radiation BBQ (the battle-tested PackBots & Warriors — no problem). So… ouch?

For now, HAL & Japan lead the exoskeletal pack, but with a quick look at Andra Keay’s survey piece over at Robohub it’s clear that HAL and the PLL are in a crowded and rapidly advancing field. So, if the U.S. or France or Germany or Korea or the Kiwis or whomever are first to produce a nimble, sufficiently powered, appropriately equipped, and ready-for-market & deployment human amplification platform, Japanese energy companies and government agencies and disaster response teams just might add those to cart instead. Without rapid and inspired development and improvement, HAL & Activelink, while perhaps remaining viable for Japan’s aging society industry, will be watching emergency response and cleanup teams at home with their handsome friend Asimo and his pet Aibo, wondering whatever happened to all the awesome, innovative, and world-leading Japanese robots.

It’ll all look so real on a 80-inch Samsung flat-panel HDTV.

Note on Multimedia:
Main images were scraped from the above Diginfo.tv & AFPBBNEWS
YouTube videos, respectively. Because there just aren’t any decent stills
out there — what else is a pseudo-journalist of questionable competency to do?

This piece originally appeared at Anthrobotic.com on January 17, 2013.