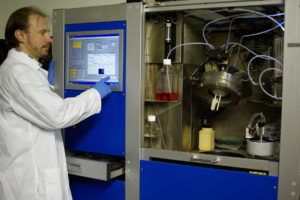 Globally about 15 percent of manmade carbon dioxide comes from vehicles. In more developed countries, cars, trucks, airplanes, ships and other vehicles account for a third of emissions related to climate change. Emissions standards are fueling the lubricant additives market with innovation.

Up to 33% of fuel energy in vehicles is used to overcome friction. Tribology is the science of interacting surfaces in relative motion inclusive of friction, wear and lubrication. This is where TriboTEX, a nanotechnology startup is changing the game of friction modification and wear resilience with a lubricant additive that forms a nano-structured coating on metal alloys.

This nano-structured coating increases operating efficiency and component longevity. It is comprised of synthetic magnesium silicon hydroxide nanoparticles that self-assemble as an ultralow friction layer, 1/10 of the original friction resistance. The coating is self-repairing during operation, environmentally inert and extracts carbon from the oil. The carbon diamond-like nano-particle lowers the friction budget of the motor, improving fuel economy and emissions in parallel while increasing the power and longevity of the motor.

TriboTEX has a Kickstarter campaign that has just surpassed $100,000 in funding. The early bird round has just closed that offered the product at one half the cost of its retail. The final round offers the lubricant system self-forming coating at 75 percent and is ending shortly. The founder Dr. Pavlo Rudenko, Ph.D. is a graduate of Singularity University GSP11 program.