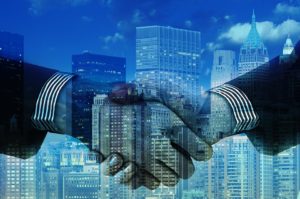 Exponential Fever. The business world is currently gripped by exponential fever. The concept came to prominence with Moore’s law — the doubling every 18–24 months of the amount of computer power available for $1,000. The phenomenon has since been replicated in many fields of science and technology. We now see the speed, functionality and performance of a range of technologies growing at an exponential rate – encompassing everything from data storage capacity and video download speed to the time taken to map a genome and the cost of producing a laboratory grown hamburger.

New Pretenders. A wave of new economy businesses has now brought exponential thinking to bear in transforming assumptions about how an industry works. For example, AirBnB handles roughly 90 times more bedroom listings per employee than the average hotel group, while Tangerine Bank can service seven times more customers than a typical competitor. In automotive, by adopting 3D printing, Local Motors can develop a new car model 1,000 times cheaper than traditional manufacturers, with each car coming ‘off the line’ 5 to 22 times faster. In response, businesses in literally every sector are pursuing exponential improvement in everything from new product development and order fulfillment through to professional productivity and the rate of revenue growth.

Stepping Up. For law firms, the transformation of other sectors and their accompanying legal frameworks creates a massive growth opportunity, coupled with the potential to bring similar approach to rethinking the way law firms operate. While some might be hesitant about applying these disruptive technologies internally, there is a clear opportunity to be captured from helping clients respond to these developments and from the creation of the industries of the future. To help bring to life the possibilities within legal, we highlight seven scenarios that illustrate how exponential change could transform law firms over the next 5 to 10 years.

Rise of the ‘Exponential Circle’. Our continuing programme of research on the future of law firms suggests that we will see exponential growth for those firms who can both master the legal implications of these technologies for their clients and become adept at their application within the firm. By 2025, we could indeed have witnessed the emergence of an Exponential Circle of law firms who have reached ‘escape velocity’ and left the rest behind.

In the various incarnations of Douglas Adams’ Hitchhiker’s Guide To The Galaxy, a sentient robot named Marvin the Paranoid Android serves on the starship Heart of Gold. Because he is never assigned tasks that challenge his massive intellect, Marvin is horribly depressed, always quite bored, and a burden to the humans and aliens around him. But he does write nice lullabies.

While Marvin is a fictional robot, Scholar and Author David Gunkel predicts that sentient robots will soon be a fact of life and that mankind needs to start thinking about how we’ll treat such machines, at present and in the future.

“Traditionally, the qualities for moral standing are things like rationality, sentience (and) the ability to use languages. Every entity that has these properties generally falls into the community of moral subjects,” Gunkel said. “The problem, over time, is that these properties have changed. They have not been consistent.”

To illustrate, Gunkel cited Greco-Roman times, when land-owning males were allowed to exclude their wives and children from moral consideration and basically treat them as property. As we’ve grown more enlightened in recent times, Gunkel points to the animal rights movement which, he said, has lowered the bar for inclusion in moral standing, based on the questions of “Do they suffer?” and “Can they feel?” The properties that are qualifying properties are no longer as high in the hierarchy as they once were, he said.

While the properties approach has worked well for about 2,000 years, Gunkel noted that it has generated more questions that need to be answered. On the ontological level, those questions include, “How do we know which properties qualify and when do we know when we’ve lowered the bar too low or raised it too high? Which properties count the most?”, and, more importantly, “Who gets to decide?”

Beyond the ontological issues, Gunkel also notes there are epistemological questions to be addressed as well. If we were to decide on a set of properties and be satisfied with those properties, because those properties generally are internal states, such as consciousness or sentience, they’re not something we can observe directly because they happen inside the cranium or inside the entity, he said. What we have to do is look at external evidence and ask, “How do I know that another entity is a thinking, feeling thing like I assume myself to be?”

To answer that question, Gunkel noted the best we can do is assume or base our judgments on behavior. The question then becomes, if you create a machine that is able to simulate pain, as we’ve been able to do, do you assume the robots can read pain? Citing Daniel Dennett’s essay Why You Can’t Make a Computer That Feels Pain, Gunkel said the reason we can’t build a computer that feels pain isn’t because we can’t engineer a mechanism, it’s because we don’t know what pain is.

“We don’t know how to make pain computable. It’s not because we can’t do it computationally, but because we don’t even know what we’re trying to compute,” he said. “We have assumptions and think we know what it is and experience it, but the actual thing we call ‘pain’ is a conjecture. It’s always a projection we make based on external behaviors. How do we get legitimate understanding of what pain is? We’re still reading signs.”

According to Gunkel, the approaching challenge in our everyday lives is, “How do we decide if they’re worthy of moral consideration?” The answer is crucial, because as we engineer and build these devices, we must still decide what we do with “it” as an entity. This concept was captured in a PBS Idea Channel video, an episode based on this idea and on Gunkel’s book, The Machine Question.

To address that issue, Gunkel said society should consider the ethical outcomes of the artificial intelligence we create at the design stage. Citing the potential of autonomous weapons, the question is not whether or not we should use the weapon, but whether we should even design these things at all.

“After these things are created, what do we do with them, how do we situate them in our world? How do we relate to them once they are in our homes and in our workplace? When the machine is there in your sphere of existence, what do we do in response to it?” Gunkel said. “We don’t have answers to that yet, but I think we need to start asking those questions in an effort to begin thinking about what is the social status and standing of these non-human entities that will be part of our world living with us in various ways.”

As he looks to the future, Gunkel predicts law and policy will have a major effect on how artificial intelligence is regarded in society. Citing decisions stating that corporations are “people,” he noted that the same types of precedents could carry over to designed systems that are autonomous.

“I think the legal aspect of this is really important, because I think we’re making decisions now, well in advance of these kind of machines being in our world, setting a precedent for the receptivity to the legal and moral standing of these other kind of entities,” Gunkel said.