I am not an astronomer or astrophysicist. I have never worked for NASA or JPL. But, during my graduate year at Cornell University, I was short on cross-discipline credits, and so I signed up for Carl Sagan’s popular introductory course, Astronomy 101. I was also an amateur photographer, occasionally freelancing for local media—and so the photos shown here, are my own.

By the end of the 70’s, Sagan’s star was high and continuing to rise. He was a staple on the Tonight Show with Johnny Carson, producer and host of the PBS TV series, Cosmos, and he had just written Dragons of Eden, which won him a Pulitzer Prize. He also wrote Contact, which became a blockbuster movie, starring Jodie Foster.

Sagan died in 1996, after three bone marrow transplants to compensate for an inability to produce blood cells. Two years earlier, Sagan wrote a book and narrated a film based on a photo taken from space. 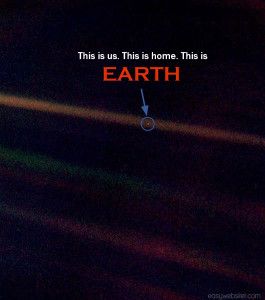 Pale Blue Dot is a photograph of Earth taken in February 1990, by Voyager 1 from a distance of 3.7 billion miles (40 times the distance between earth and the sun). At Sagan’s request (and with some risk to the ongoing scientific mission), the space probe was turned around to take this last photo of Earth. In the photo, Earth is less than a pixel in size. Just a tiny dot against the vastness of space, it appears to be suspended in bands of sunlight scattered by the camera lens.

Four years later, Sagan wrote a book and narrated the short film, Pale Blue Dot, based on the landmark 1990 photograph. He makes a compelling case for reconciliation between humans and a commitment to care for our shared environment. In just 3½ minutes, he unites humanity, appealing to everyone with a conscience. [Full text]

—Which brings us to a question: How are we doing? Are we getting along now? Are we treating the planet as a shared life-support system, rather than a dumping ground?

Sagan points out that hate and misunderstanding plays into so many human interactions. He points to a deteriorating environment and that that we cannot escape war and pollution by resettling to another place. Most importantly, he forces us to face the the fragility of our habitat and the need to protect it. He drives home this point by not just explaining it, but by framing it as an urgent choice between life and death.

It has been 22 years since Sagan wrote and produced Pale Blue Dot. What has changed? Change is all around us, and yet not much has changed. To sort it all out, let’s break it down into technology, our survivable timeline and sociology.

We have an insatiable appetite for raw materials, open spaces, cars and luxury. Yet no one seems to be doing the math. As the vast populations of China and India finally come to the dinner table (2 billion humans), it is clear that they have the wealth to match our gluttony. From where will the land, water, and materials come? And what happens to the environment then? In Beijing, the sky is never blue. Every TV screen is covered in a thick film of dust. On many days, commuters wear filter masks. There is no grass in the parks and no birds in the sky. Something is very wrong. With apologies for a mixed metaphor, the canary is already dead while the jester continues to dance.

Is it time to revisit Pale Blue Dot? Is it still relevant? The urgency of teaching and heeding Carl Sagan’s words has never been more urgent than now.

Carl Sagan probably didn’t like me. When I was his student, I was a jerk.

Sagan was already a TV personality and author when I took Astronomy 101 in 1977. Occasionally, he discussed material from the pages of his just-released Dragons of Eden, or slipped a photo of himself with Johnny Carson into a slide presentation. He clearly was a star attraction during parent’s weekend before classes started.

Indeed, he often used the phrase “Billions and Billions” even before it led as his trademark. Although he seemed mildly mused that people noticed his annunciation and emphasis, he explained that he thought it was a less distracting alternate to the phrase “That’s billions with a ‘B’ ” when generating appreciation for the vast scope of creation.

At this time that Sagan was my professor, he appeared on the cover of Newsweek magazine. Like a lunkhead, I wrote to Newsweek, claiming that his adulation as a scientist was misplaced and that he was nothing more than an PR huckster for NASA and JPL in the vein of Isaac Asimov. I acknowledged his a gift for popularizing science, but argued that he didn’t have the brains to contribute in any tangible way.

I was wrong, of course. Even in the role of education champion, I failed to appreciate the very powerful and important role that he played in influencing an entire generation of scientists, including, Neil DeGrasse Tyson. Although Newsweek did not publish my letter to the editor, someone on staff sent it to Professor Sagan! When the teaching assistant, a close friend of Sagan, showed me my letter, I was mortified.

Incidentally, I always sat in the front row of the big Uris lecture hall. As a student photographer, I took many photos, which show up on various university web sites from time to time. In the top photo, Professor Sagan is crouching down and clasping hands as he addresses the student seated next to me.