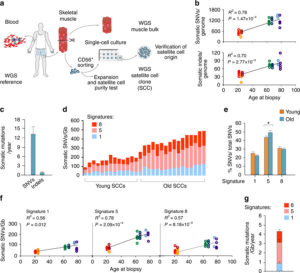 Study based upon human skeletal muscle aging, mutagenesis, and the role of #satellite cells.

“A more comprehensive understanding of the interplay of stem cell–intrinsic and extrinsic factors will set the stage for improving cell therapies capable of restoring tissue homeostasis and enhancing muscle repair in the aged.”

Human aging has multiple effects on the human body. One of the effects of human aging is the reduction in skeletal muscle (SkM) function and a reduction in the number and activity of satellite cells (SCs), the resident stem cells. The whole genome of single SC clones of the leg muscle vastus lateralis from healthy individuals of different ages (21–78 years) was analyzed, to study the specific connection between SC aging and muscle impairment. In healthy adult muscle rapid increase of SCs is consistent with the accumulation rate of 13 somatic mutations per genome per year. Mutations typically do not happen in SkM-expressed genes because they are protected. However, as mutations in exons and promoters increase, genes involved in SC activity and muscle function are targeted which results in aging. Exons are coding sections of an RNA transcript, or the DNA encoding it, that are translated into protein. Proteins are the synthesis of molecules. A change in of a single base pair that caused the substitution of a different amino acid in the resulting protein (missense mutation) that was propagated to the muscle and detected in association with SC mutations affecting the whole tissue. #Somatic mutagenesis in SCs as a result is the driving force in the age related decline of SkM function. 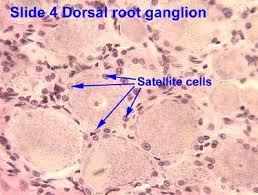 Satellite cells (SCs) are a heterogeneous population of stem and progenitor cells. These cells play an important role in the growth and development of myofiber. The enlargement, regeneration, and remodeling in skeletal muscle (SkM) is the pivotal role of satellite cells. Satellite cells are dormant until they become activated through exercise or SkM injury. Upon injury skeletal muscle have a remarkable ability to recover from injury. Skeletal muscle goes through a sophisticated degeneration and regenerative process that takes place at the tissue, cellular, and molecular levels. This regenerative process relies upon the dynamic interplay between satellite cells and their environment (stem cell niche). SCs multiply further when committed to myogenic differentiation. As SCs proliferate further they begin to combine with existing SkM fibers and supply new nuclei to the growing and regenerating fibers. The declining of numbers of proliferative potential of SCs is one sign of aging in human SkMs.

A flawed SC compartment is foreseen as a major contributor for age-related deficiencies such as, skeletal muscle tissue having restricted mobility and voluntary functions. The results of such defects include a reduced capacity to respond to hypertrophic stimuli such as exercise and impaired recovery from muscle disuse and injury and the disruption of muscle tissue homeostasis. Moreover, the SCs of nonactive adult animals have been shown to contribute to differentiated fibers in non-injured muscles. Less important is the basal turnover of nuclei in adult fibers in the protection from sarcopenia. This hypothesis was tested and showed that lifelong reduction of satellite cells neither accelerated nor exacerbated sarcopenia and that satellite cells did not contribute to the maintenance of muscle size or fiber type composition during aging, but that their loss may contribute to age-related muscle fibrosis. The progressive loss of SkM mass and function known as sarcopenia affects up to 29% of the population aged 85 years. The accumulation of sarcopenia causes a highly disabling condition. It is essential, nonetheless, that the characterization of SCs in human pathology be further explored. SCs are a key factor in limiting the occurrence of fibrosis in the SkM of mice affected by sarcopenia.

The progressive loss of SkM mass and function known as sarcopenia affects up to 29% of the population aged 85 years. The accumulation of sarcopenia causes a highly disabling condition. It is essential, nonetheless, that the characterization of SCs in human pathology be further explored. Scs are key in limiting the occurrence of fibrosis in the SkM of mice affected by sarcopenia. Genome integrity is essential for the function of stem-cells. But there still must be some stability of the genome. Genetic mutations in the soma has diverse physiological roles and pathological consequences, such as the decline of stem-cell functions. Starting from the first division of the embryo, modifications in the genome extend from single-base changes (single-nucleotide variants (SNVs)) to insertions or deletions of a few bases (indels) to chromosomal rearrangements and occur during the whole life. Somatic variants are not propagated to the whole individual but to a subpopulation of cells in the body, which is strikingly different from germline variants. Adult human tissues become a mosaic of genetically different cells as a result. Furthermore, as a result of the buildup of errors taking place either during cell-division or because of environmental induced DNA damage, somatic mutation burden increases, causing age-related disease. Currently, somatic mutation burden in human SCs or SkM is unknown.

The purpose of the investigation of genetic alterations that occur with aging in the genome of human adult SCs is to use the results to clearly explain mutational processes and SC replication rate occurring in vivo in adult human muscles. The prediction of global consequences on muscle aging and sarcopenia was done by evaluating the functional effects of somatic mutations on SC proliferation and differentiation.