Nobody Can Predict the Moment of Revolution 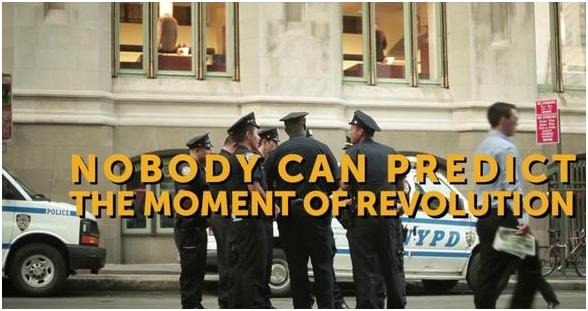 While watching the occupy wall street movement gain momentum and challenge the status quo, we in the transhumanist and technoprogressive community should be taking notes at the differences between this movement and those of the 20th century in direct opposition to some set of conservative policies.

This movement is not in direct opposition to anything. It is however, in opposition to any kind of conservative solutions being recommended to the systemic economic ailments of today. This movement attacks fascism while often improperly referencing the term, it attacks crony capitalism which is culturally vague, and corporatism which is a new word. While an academic or linguist might find them difficult to understand, it is quite simple to judge them as defending themselves as a part of society that is being depleted, as a direct result of our inability to allocate tangible value to them. They are angry. This growing mass of people across the United States is not looking to return to a socio-economic model that influences similar politics of the last century.

Watch the reference video. This is the same group of people (young and old) that are technologically transparent as Peter Singer identifies. They would likely take, but are not looking for traditional jobs, as I and so many others have talked/written about frequently. This vast majority of human potential, while looking at the numbers, can’t be satisfied their odds to compete successfully. Of course, democratic culture has a venue to argue the abstraction of political and even economic rifts in society, but there are none that allow the relatively untrained to argue root causes of the problems preventing their previously comfortable existence.

Movements that aren’t rigidly against some establishment, have a difficult time forming a set of solutions to seek. While the core argument may be “revolting against capitalism”, there is no replacement in site. Having stated that, the Smithian theories aren’t ill prepared; they do however, fail to address the very primitive ability of humans to gauge competition and allocate assets (tangible value); even in a vast market of millions of participants with relatively modest self-interest.

Those opposed, find five congruent contradictions (Ecology, Inequality, Poverty, Property, Systemic Risk) when considering the modern manifestation of what Aristotle, Adam, and Ayn elaborated on in the modern era. These contradictions are not in fact intrinsic to capitalism. They are intrinsic to the animal. In the human pursuit for ecological prudence, egalitarianism, distribution of wealth, shared property, and managed risks; we regularly reject the idea that it is impossible to achieve our goals without our technological extensions…without transparency of information, without distribution of education, without allocation of technologies based on need, as a result of our understandings through transparency. Courting technoprogressivism onto the American political stage may have been a viewed as radical in the last decade, even as its consistent economic recession ensued. But it may not be today, amongst the somewhat informed activists of virtual social networkers and physical street walkers.

In order to be rendered valuable, entities (people in this case) have to be represented well under some agreed upon or legal model. In the case of liberal desperation I think people are willing to consider the potential of living-out the interconnected scenario painted in my voting public or more vividly by Hank Pellissier‘s “representative democracy” in Invent Utopia Now. The transhuman rhetoric based around fundamentally transforming the human condition is not farfetched for the leftist movements of today. One would be naïve to think that tax reform or austerity or redistribution of wealth alone, could cure my aforementioned contradictions. There are no conservative means to remedy the problems of today, only to return to those of the past. Movements like occupy wall street are unlikely to reject transhumanist conversation because of their spiritual or educational or morally conservative roots. Further, we are witnessing an opportunity to empower activist’s discomfort with H+ solutions, to occupy all streets.