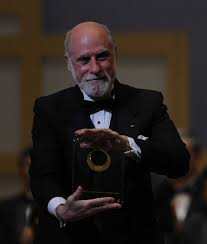 Wednesday on the Opinion Pages of the NY Times the renowned Vinton Cerf “father of the internet” published an article titles Internet Access Is Not A Human Right. It could be argued that the key word here is “access”, but before I address access again, I should start with the definition of the internet. I had this debate while at Michigan State in October of 2010 with the philosopher Andrew Feenberg. I’ll do my best not to be redundant while everything is still live via the links in this article.

Perhaps the internet requires much more definition, as the roots of the word can be confusing. Inter: situated within – Net: any network or reticulated system of filaments or the like. Its terminology is synonymous with the “web” or a web, which requires multiple linkages to points of initiation in order to exist well. If this is the internet that Feenberg is referring to then I’d think it accurate. However, the internet is not actually a web of ever connected points. Information destinations are not required.

The internet is analogous to space. Regardless of whether or not we access space, its potential exists – we can access or insert entities of sorts into the space regardless of, if another user were present to receive information of sorts from the distributed. Space is a dynamic system of expanding material potential as is the internet’s material potential. The potential of the internet expands as users (or rather, potential users) access to the internet expands – access could come in many forms including, user population(s) growth or by computing speed or by computing power… The internet, regardless of the constraints of the word, it cannot be identified as a specific technology.

While visiting MSU, Feenberg uses a “ramp” as analogous with the internet, which was at the center of his mistake. I don’t mean to read gerontophobic, but based on the pervasive analysis that I’ve witnessed from Feenberg and Cerf’s generation; I’d have to accredit their perspective to the relatively similar changes in technology that they’ve seen during the 20th century. The difference in composition and utility of a technology (hardware, software, methodology) and that of the internet are synonymous with that of an air-craft and the expanding celestial matter beyond earth’s ionosphere (that’s a sufficient analogy).

Cerf wrote “technology is an enabler of rights, not a right itself. There is a high bar for something to be considered a human right.

He is correct! The problem exists when he identifies the internet as a technology, which it cannot be (to be redundant). This is in fact a human rights issue. It is perhaps the most significant human rights issue of our time, because of the internet role in providing the potential for transparencies in the public and private sectors. The deterministic nature of our technologies is bridging the cultural, political, legal, and economic GAPS of all our societies today, and if we as individuals allow a few mistaken “leaders” or the interests of institutions to control our ability to access a space, because of their resume, then we are all doomed. The implications of the masses adopting Cerf and Feenberg’s view on space are tremendous in building an ethically sound environment for human development.

Regarding Cerf’s word “access”, it may provide him an out from his varied rhetoric in the article. Near the end he transitions to civil rights where he writes “the responsibility of technology creators themselves to support human and civil rights” suggesting the internet hold egalitarian virtues. I’m no egalitarian, as it just doesn’t prove feasible in a world of, even, hyper-connected individuals.

While the ability to access an open space should not be prohibited, the technologies of certain kinds could be. Reference weapons of sorts. I’m no advocate for government supplying all of their citizens with camera phone (although it would be great idea for the individual and institution), but I am against governmental and other agents making efforts to restrict the individual’s ability to populate space with their entities aside from the technologies that one would hold on his/her person.

When the United Nations declared the Internet as a Human Right (PDF), they weren’t necessarily evaluating its full potential, but they were stressing that individuals should have the ability to be transparent and review information of all kinds as they so pleased, catering to the collective knowledge of the species and everything it supports. The problem with this article are the future implications of its rhetoric, even as he means well.

Tangent: Cerf having studied math, computer science, and IS for decades; knows as well as anyone that it is virtually (pun intended) impossible to prohibit internet expansion as small pockets of those educated in the knowledge community of development can find a way. Any computer (which would the blockage point) can be hacked its just a matter of time and will. I spent the last year consulting with Hewlett-Packard Global Info Security on multiple acquisitions of competitive companies and security tool providers, and as anyone in the IS/IT security industry can tell you, there are no solutions, only active management of incidents and problems. This is why methodologies are as (if not more) value than hard/software in modern business transactions. So then why wouldn’t Cerf think more thoroughly about this before publishing in the NY Times? Could it be because he has an equity stake (as an employee of multiple firms) in a less open space (internet). Speculation aside, I’m in the business services industry, I studied “control” specifically. Business is about control, which is the value proposition in establishing institutions virtues as separate from those of the individual. We can only forecast and manage risks well in areas that we can define and control. Business itself doesn’t require an suppressive type of control to make good calls on risks. A more transparent world could tell us all (individuals and institutions alike) more about the types of decisions that benefit the most in a society.

In the future let’s all make a conscious effort to keep spaces open and hope that the benefits incentivize philanthropists, entrepreneurs, and governments to provide technology to the masses at a rate that enhances the human condition.