Greetings to the Lifeboat Foundation community and blog readers! I’m Reno J. Tibke, creator of Anthrobotic.com and new advisory board member. This is my inaugural post, and I’m honored to be here and grateful for the opportunity to contribute a somewhat… different voice to technology coverage and commentary. Thanks for reading. 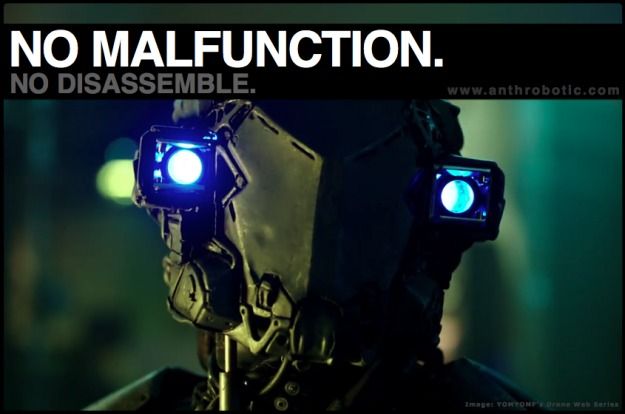 This Here Battle Droid’s Gone Haywire
There’s a new semi-indy sci-fi web series up: DR0NE. After one episode, it’s looking pretty clear that the series is most likely going to explore shenanigans that invariably crop up when we start using semi-autonomous drones/robots to do some serious destruction & murdering. Episode 1 is pretty and well made, and stars 237, the android pictured above looking a lot like Abe Sapien’s battle exoskeleton. Active duty drones here in realityland are not yet humanoid, but now that militaries, law enforcement, the USDA, private companies, and even citizens are seriously ramping up drone usage by land, air, and sea, the subject is timely and watching this fiction is totally recommended.

It would be nice to hope for some originality, and while DR0NE is visually and means-of-productionally and distributionally novel, it’s looking like yet another angle on a psychology & set of issues that fiction has thoroughly drilled — like, for centuries.

Higher-Def Old Hat?
Okay, so the modern versions go like this: one day an android or otherwise humanlike machine is damaged or reprogrammed or traumatized or touched by Jesus or whatever, and it miraculously “wakes up,” or its neural network remembers a previous life, or what have you. Generally the machine becomes severely bi-polar about its place in the universe; while it often struggles with the guilt of all the murderdeathkilling it did at others’ behest, it simultaneously develops some serious self-preservation instinct and has little compunction about laying waste to its pursuers, i.e., former teammates & commanders who’d done the behesting.

Admittedly, DR0NE’s episode 2 has yet to be released, but it’s not too hard to see where this is going; the trailer shows 237 delivering some vegetablizing kung-fu to it’s human pursuers, and dude, come on — if a human is punched in the head hard enough to throw them across a room and into a wall or is uppercut into a spasticating backflip, they’re probably just going to embolize and die where they land. Clearly 237 already has the stereotypical post-revelatory per-the-plot justifiable body count.

Where have we seen this pattern before? Without Googling, from the top of one robot dork’s head, we’ve got: Archetype, Robocop, iRobot (film), Iron Giant, Short Circuit, Blade Runner, Rossum’s Universal Robots, and going way, way, way back, the golem.

Show Me More Me
Seems we really, really dig on this kind of story. END_OF_DOCUMENT_TOKEN_TO_BE_REPLACED