Do you remember all the hoopla last year when the Higgs Boson was confirmed by physicists at the Large Hadron Collider? That’s the one called the ‘God particle’, because it was touted as helping to resolve the forces of nature into one elegant theory. Well—Not so fast, bucko!…

First, some credit where credit is due: The LHC is a 27-kilometer ring of superconducting magnets interspersed by accelerators that boost the energy of the particles as they whip around and smash into each other. For physicists—and anyone who seeks a deeper understanding of what goes into everything—it certainly inspires awe.

Existence of the Higgs Boson (aka, The God Particle) was predicted. Physicists were fairly certain that it would be observed. But its discovery is a ‘worst case’ scenario for the Standard Model of particle physics. It points to shortcomings in our ability to model and predict things. Chemists have long had a master blueprint of atoms in the Periodic Table. It charts all the elements in their basic states. But, physicists are a long way from building something analogous. That’s because we know a lot more about atomic elements than the fundamental building blocks of matter and energy. [continue below image] 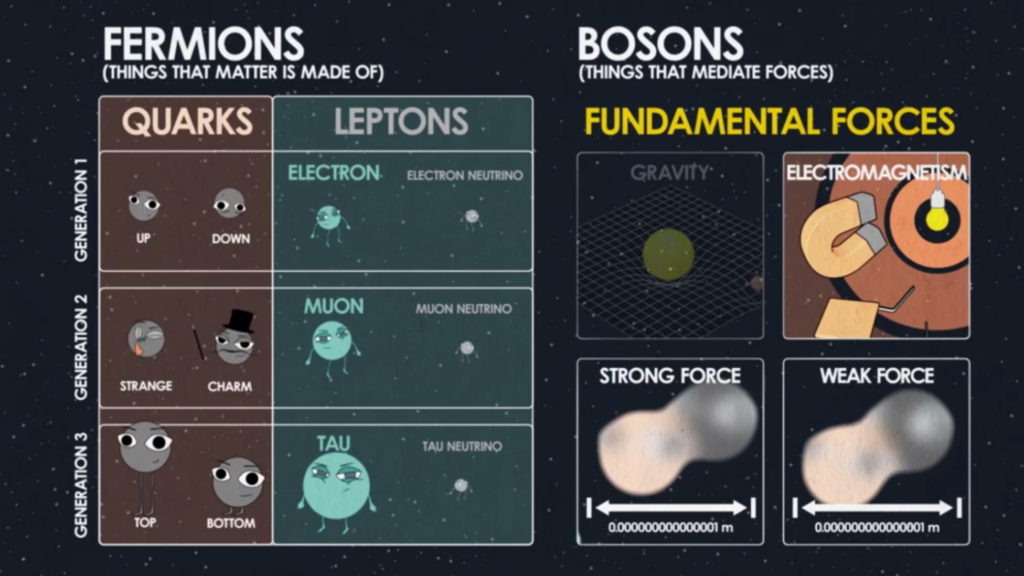 So, what do we know about fundamental particles the forces that bind them? HINT: There are 61 that we know of or have predicted and at least two about which we don’t yet have any clue: The pull of Gravity and dark matter / dark energy.

This video produced by the BBC Earth project is an actors’ portrayal of a news interviewer and a particle physicist. If we were to simply watch these two guys talk in front of a camera, it would be pretty boring (unless, of course, the physicist has charm and panache, like the late Richard Feynman or my own Cornell professor, Carl Sagan). So, to spice it up a bit, BBC has added a corny animation of two guys talking with an anthropomorphic illustration of cartoon particles. Corny? Yes! But it helps to keep a viewer captivated. And, for any armchair physicist, the story is really exciting!

See the video here. It takes a moment to load—but for me, the wait is worthwhile.