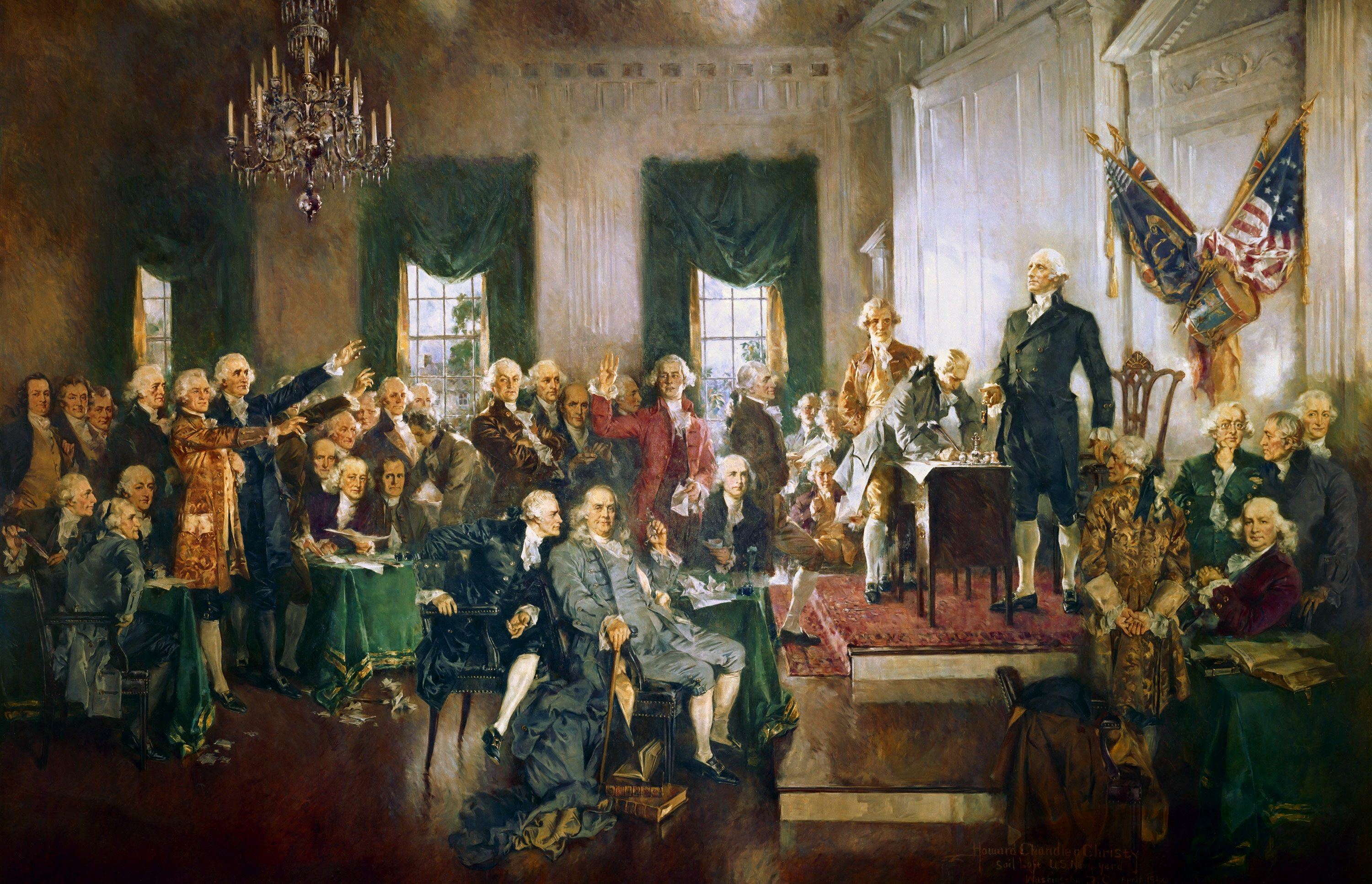 #Exclusive: @HJBentham @ClubOfINFO responds to @Hetero_Sapien @IEET
After the reprint at the ClubOfINFO webzine of Franco Cortese’s excellent IEET (Institute for Ethics and Emerging Technologies) article about how advanced technology clashes with the Second Amendment of the US Constitution, I am interested enough that I have decided to put together this response. Changes in technology do eventually force changes in the law, and some laws ultimately have to be scrapped. However there is an argument to be made that the Second Amendment’s deterrent against tyranny should not be dismissed too easily.
Franco points out that the Second Amendment’s “most prominent justification” is that citizens require a form of self-defense against a potentially corrupt government. In such a case, they may need to take back the state by force through a “citizen militia”.

The argument given by Franco against the idea of citizens engaging their government in battle leads to a conclusion that “technological growth has made the Second Amendment redundant”. Arms in the Eighteenth Century were “roughly equal” for the citizenry and the military. According to Franco’s article, “in 1791, the only thing that distinguished the defensive or offensive capability of military from citizenry was quantity. Now it’s quality.”
I believe the above point about the state monopoly on force going from being based on quantity to quality can be disputed. The analysis from Franco seems to be that the norms of warfare and the internal effectiveness of state power are set by the level technology available to the state. Although there is of course a strong technological element involved in these manifestations of state power, it is more accurate to say “stateness” – which military power is only the international reflection of – is due to a combination of having more legitimacy, resources and organization. The effectiveness of this kind of “stateness”, including the ability of the most powerful states to overcome challenges of internecine warfare, has not changed very decisively since the Nineteenth Century.
In fact, stateness is said by many analysts to have declined worldwide since the fall of the Berlin Wall. Since that event and the subsequent dissolution of the USSR, the number of states facing internal crisis seems to have only risen, which suggests stateness is being weakened globally due to many complex pressures. Advanced technology is itself even credited with eroding stateness, as transport and the Internet only give citizens ever more abilities to get around, provoke, rebel and ultimately erode the strength and legitimacy of the state. In most arenas of social change, states face unprecedented challenges from their own citizens because of the unexpected changes in advanced technology that have taken place over the last few decades. Concerning the future of this trend, Franco aptly anticipates in his article that “post-scarcity” technologies would make things even more uncomfortable for the state, pushing it to rely on secrecy and suppression of knowledge to avoid proliferation of devastating weapons.
Much of this commentary on the loss of stateness may seem irrelevant to the right to bear arms in the United States, but it is relevant for reasons that will become clear in this article. We cannot say that the US government has a true monopoly on force due to its technology, and that the potential of a citizen uprising is gone. We have seen too many other “modern” states such as Yugoslavia, Somalia, Lebanon, Libya, Syria and Mali quickly deteriorate into full scale civil war just because groups of determined citizens took up light weapons (many of those rebels have far less skill and technology at their disposal than the average US gun owner).

Internecine warfare in the United States

From what we have seen of civil war in other countries, we cannot know that simple rifles and handguns really are a useless path of resistance against a modern state tyranny, just because the tyrants will have more lethal options such as cluster bombs and nerve gas. Even the most crudely armed insurrectionists are capable of overthrowing their governments, if they are determined and numerous enough. Having a lightly armed population from the outset, like the US population, only makes it more likely that such a war against tyranny would be ubiquitous and likely to succeed swiftly from the outset.
If we do take the unlikely position of supposing that the United States will degenerate into a true tyranny in the Aristotelian definition, then US citizens certainly need their right to bear arms. More than that, their path of armed resistance using those light weapons could still realistically win. If their cause was just, we can suppose that they would be battling in self-defense against a tyrannical regime that has plummeting legitimacy, or is buying time for contingents of the military to break off and join the rebellion. In such a situation, the sheer number of citizens taking up arms would do more than just demoralize government troops and lead to indecision among them.
The fact of a generally well-armed population would, if they took up arms against their regime, guarantee the existence of a widespread insurgency to such an extent that the rulers would face many years of internecine resistance and live under the constant specter of assassination. Add the internal economic devastation caused by citizens committing acts of sabotage and civil disobedience, foreign sanctions by other states, and even international aid to the insurgents by external actors, and the tyrants could be ousted even by the most lightly armed militia units.
Explaining the imbalance that has prevailed between the military might of states and the internal ability of citizens to resist their ruling regimes with arms, Franco notes that the “overwhelming majority of new technological advances are able to be leveraged by the military before they trickle down to the average citizen through industry.” This is certainly true. However, the summation that resistance is futile would not take into account the treacherous opportunities that exist in every internecine war.
When the state projects force internally, it prefers to call that “law enforcement” for as long as it remains in control of the situation. Even if the violence gets more widespread and becomes civil war, the state denies such a fact until the very last moment. Even then, it prefers to minimize the damage on its own territory, because the damage would ultimately have to be repaired and paid for by the state itself. Even in a civil war situation, the technology brought to bear against citizens by the government would never be as heavy or destructive as the kind of equipment brought to bear against foreign states or non-state actors. This is for the simple reason that the state, in a civil war, has to try to avoid obliterating its own constituents and infrastructure for political reasons. If it is caught committing such a desperate and disproportionate act, it will only undermine itself and give a propaganda coup to its lightly equipped opponents by committing a heavy-handed atrocity.
The imbalance of the superior technology of the United States government in contrast to the basic handguns and rifles of its citizenry is real, but it would have zero significance if a real internecine war took place in the United States. The deadliest weapons in the arsenal of the United States, such as nuclear or biological weapons, would never be used to confront internecine threats, so they are not relevant enough to enter the debate on the Second Amendment.
The concept of taking back government via a citizen militia is not about defeating a whole nation in the conventional sense through raw military strength, but rather about a multifaceted political struggle in which the nation is able to confront and defeat the ruling regime via some form of internecine combat. The US would tend to prefer handling militant and “terrorist” adversaries on its own territory with the bare minimum of heavy equipment and ordnance at all times. Given this, the real technological contest would only be between opposing marksmen and their rifles (any advanced firearms would soon be seized by guerrillas and used back against the state). No ridiculously unbalanced battle with tanks, nukes and generals on one side and “simple folks” with shotguns on the other side would take place. In most civil wars, the use of tanks and warplanes (never mind nukes) only tends to make matters worse for the ruling government by hitting bystanders and further alienating the people on the ground. The US military leadership should know this better than anyone else, having condemned regime after regime for making that same mistake of heavy-handed escalation.
Anti-tyranny insurgency using only light (and easily hidden) armaments is as viable in 2014 as it was in the Eighteenth Century, and has proven sufficient to delegitimize and ultimately remove brutal regimes from power. Any sufficiently unpopular regime can be delegitimized and removed from power by the armed resistance of lightly-equipped militia forces.
Franco’s conclusion that the US should neither extend the Second Amendment to cover giving everyone access to ridiculously devastating weapons, nor scrap the Second Amendment altogether, is wise and relevant to helping US society make some difficult decisions. Law (and by extension stateness) is “uncertain in the face of technologies’ upward growth.” States that want to remain popular should try to be as adaptive as possible to new (and old) technologies and ideas, and not be swayed by any single narrow-minded idea or program for society. If the American people distrust their system of government enough to keep their right to bear arms, for fear of tyranny, then the Second Amendment ought to remain.