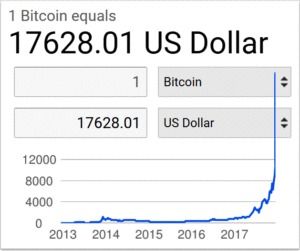 Dear Reader: I believe in Bitcoin. Yet, there is a “But” in the last paragraph below…

I believe in Bitcoin. Its rise is not fueled solely by investor hysteria. Rather, it is a product of delayed appreciation for a radical, transformative network technology.

In the mid 1970s, the microprocessor was spreading to every consumer gadget. It started a trend toward tools that added power and enjoyment to all facets of life. And they were quickly becoming faster, lower-power, lower-cost and more ubiquitous. If you understood the potential of the computer chip before mainstream investors, you couldn’t really invest directly in the microprocessor. After all, it is a platform improvement. But you could come very close—You might have invested in Intel, Fairchild or Texas Instruments.

Jump forward 20 years: In the mid 1990s, the Internet was spreading to every class of citizen and to all corners of the earth. But just as with a computer chip, you could own a web site, but you couldn’t own a piece of the internet’s market potential. You can’t invest in an idea, unless you are the inventor and you hold a patent.

But, 5, 6 and 7 years ago, many individuals saw the future. They understood that Bitcoin is transformative. They recognized that—contrary to popular misconception—Bitcoin is backed by something more tangible than dollars, Euros and Renminbi. More importantly, it exhibits the potential to become the global reserve currency. And it continues to do so, even as internal bickering threatens its utility as a consumer payment instrument. That’s because It diverts liquidity away from gold and national FIAT. Ultimately, it forces governments to be transparent and accountable to its citizens. This is further reinforced by rampant inflation in countries around the world and a growing list of trading partners who seek alternatives to the US dollar. 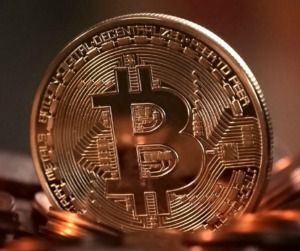 But, just like real estate, the supply of Bitcoin is capped. No one can produce more. It’s the math, stupid! Even if you only realized this one year ago, you still would have reaped a 2000% return on your investment as of this morning. (I am cherry-picking here, but Bitcoin had just crossed $630 on October 20 2016).

Let’s be clear: This is not a dot-com bubble or a 17th century Dutch tulip bulb mania. It is far more comparable to the 19th century California gold rush. The only frenzy is to acquire a functional instrument that is still trading for far below par value—but with the strange caveat that hoarding retards liquidity and the ‘functional’ adoption that we need to sustain long-term value.

In the grand scheme of things, Bitcoin is still undervalued—even at $17,000/BTC. It will fall and it will rise, but it will certainly be valued higher years from now.

…But, I must admit that this sudden and urgent race into outer space is a bit unsettling. From an investor perspective, it is not rational to leave when I recognize that the exuberance is rational. Yet, here we are at $17,000. I am taking some bitcoin off the table—A bit of bitcoin.

Philip Raymond co-chairs CRYPSA, publishes Wild Duck and hosts the New York Bitcoin Event. He is on the New Money Systems board and led the Cryptocurrency Expo in Dubai. He frequently consults and presents.