Using maps of population density, the researchers charted the places likely to suffer the most casualties from asteroids. As might be expected, countries with large coastal populations turned out to be most vulnerable, with China, Indonesia, India, Japan and the US in the top five spots.

The team focused on smaller asteroids because they hit the Earth more frequently. An asteroid a few hundred metres across hits the planet about once every 10,000 years, on average, while those larger than 1 kilometre hit only every 100,000 years or so. Small asteroids are also harder to spot. They considered a range of impact energies corresponding to asteroids between 100 and 500 metres across, striking with typical solar system speeds of about 20,000 kilometres per second.

Simulations show the asteroid impact locations that would produce the most casualties in red. The Pacific coast of Asia is a particularly deadly place for an asteroid to strike because of tsunamis, while a direct strike on some densely populated inland areas could also cause a heavy toll (Illustration: Nick Bailey et al/University of Southampton)

The US faced the worst potential economic losses, since it has a lot of infrastructure on coastlines facing two different oceans. China was second, followed by Sweden, Canada, and Japan.

The Lifeboat asteroid shield project helps to address these risks and Tsunami warning and response systems would also help mitigate loss of life from ocean impacts.

Some information on how to reduce nuclear bomb casualties

If you are downwind of the blast, look at tree tops to see direction of wind and then flee perpendicular to the wind. Because the plumes are significantly longer than they are wide, moving as little as one to five miles perpendicular to the plume can mean the difference between life and death. People in areas upwind of the detonation site, on the other hand, are safest staying where they are.

Today’s hospital burn units provide exemplary but time consuming care to burn victims, who typically arrive sporadically and in small numbers. A nuclear attack would bring a sudden surge of patients, but the medical system could dramatically minimize fatalities by training staff and equipping non-medical people to treat second-degree burn victims in much larger numbers. The focus must be on cleaning the wounds to avoid fatal infections, administering painkillers and then moving on to the next patient. And all of this must occur in the field, since thousands of victims would not make it to a hospital. 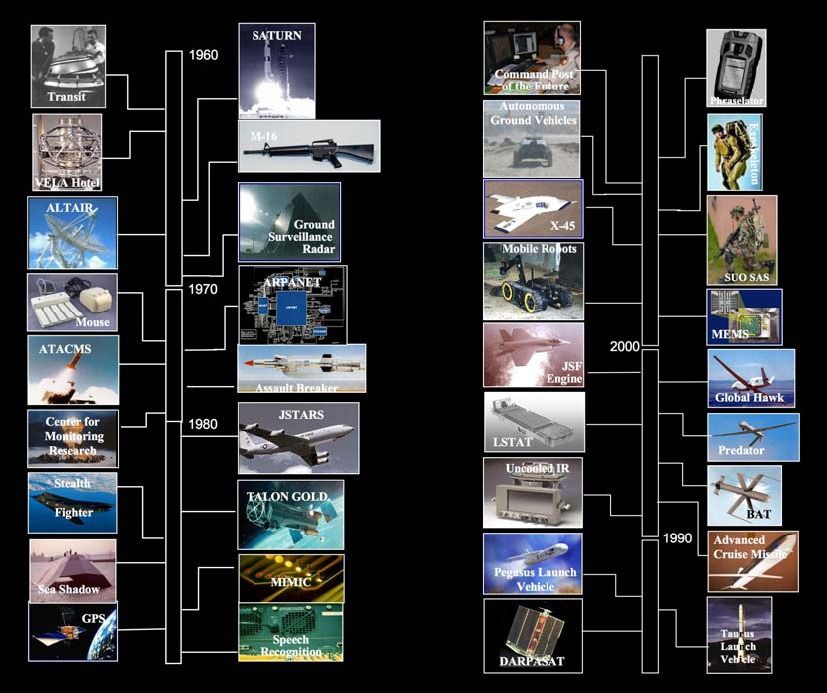 DARPA (the defense advanced research projects agency) is the R&D arm of he US military for far-reaching future technology. What most people do not realize is how much revolutionary medical technology comes out of this agency’s military R&D programs. For those in need of background, you can read about the Army & DARPA’s future soldier Landwarrior program and its medtech offshoots as well as why DARPA does medical research and development that industry won’t. Fear of these future military technologies runs high with a push towards neural activation as a weapon, direct brain-computer interfaces, and drones. However, the new program has enormous potential for revolutionary medical progess as well.

It has been said technology is neutral, it is the application that is either good or evil. (It is worth a side-track to read a discussion on this concept)

The Areas of Focus for DARPA in 2007 and Forward Are:

the potential for the destructive use of these technologies is obvious, for a a complete review of these projects and the beneficial medical applications of each visit docinthemachine.com

NASA estimates the cost to find at least 90 percent of the 20,000 potentially hazardous asteroids and comets by 2020 would be about $1 billion, according to a report NASA will release later this week. It would cost $300 million if a asteroid locating telescope was piggybacked on another vehicle. The report was previewed Monday at a Planetary Defense Conference in Washington.

The agency is already tracking bigger objects, at least 3,300 feet in diameter, that could wipe out most life on Earth, much like what is theorized to have happened to dinosaurs 65 million years ago. But even that search, which has spotted 769 asteroids and comets — none of which is on course to hit Earth — is behind schedule. It’s supposed to be complete by the end of next year.

A cheaper option would be to simply piggyback on other agencies’ telescopes, a cost of about $300 million, also rejected, Johnson said.

“The decision of the agency is we just can’t do anything about it right now,” he added.

Earth got a scare in 2004, when initial readings suggested an 885-foot asteroid called 99942 Apophis seemed to have a chance of hitting Earth in 2029. But more observations showed that wouldn’t happen. Scientists say there is a 1-in-45,000 chance that it could hit in 2036.

They think it would mostly likely strike the Pacific Ocean, which would cause a tsunami on the U.S. West Coast the size of the devastating 2004 Indian Ocean wave.

“You can’t deflect them if you can’t find them,” Logsdon said. “And we can’t find things that can cause massive damage.”

Lifeboat has an asteroid shield project

Graduate student (University of Alabama Huntsville) Blake Anderton wrote his master’s thesis on “Application of Mode-locked lasers to asteroid characterization and mitigation.” Undergraduate Gordon Aiken won a prize at a recent student conference for his poster and presentation “Space positioned LIDAR system for characterization and mitigation of Near Earth Objects.” And members of the group are building a laser system “that is the grandfather of the laser that will push the asteroids,” Fork said.

Anderton’s mode locked lasers could characterize asteroids up to 1 AU away (1.5 x 10 to the 11 meters). Arecibo and other radar observatories can only detect objects up to 0.1 AU away, so in theory a laser would represent a vast improvement over radar.

A one page powerpoint describes their asteroid detection and deflection approach About 12 of the 1AU detection volumes (around the sun in the asteroid belt) would be needed to cover the main areas for near earth asteroids.

40KW femtosecond lasers could deflect an asteroid the size of Apophis (320meters, would hit with 880 megaton force) given one year of illumination and an early start in the trajectory.

Asteroid shields are a project of the Lifeboat Foundation

The ongoing debate on the proposed missile defense shield in Europe is heating up. Poland and the Czech Republic are among the possible sites and the UK is now showing interest in supporting the missile shield. Fears over the destabilising effects of such a shield was confirmed by a Russian general who said that they would target the system.

Vladimir Putin, Russia’s president, said America would trigger an “inevitable arms race” if it deployed interceptors in Europe to knock ballistic missiles out of the sky. A senior Russian general rumbled that Russian missiles would target any interceptors in eastern Europe. Poland’s prime minister told his people that Russia was trying to “scare” them. The Czech foreign minister (a prince with a splendid moustache) complained of Russian “blackmail”.

“The aim is to break ground on a European site in 2008, and for its interceptors to become operational in 2012. This week the Polish and Czech prime ministers said they were keen on hosting the missile-defence sites. That is a change: talks with the Poles have dragged on for years, thanks to elaborate Polish demands for things such as extra missile defences for their own country. Yet both Mr Blair and his Polish rivals face objections from three sources: from Russia, from many of their own voters and from fellow European leaders.”

“In 2003, the U.K. agreed to allow the U.S. to upgrade radar stations at the Fylingdales Royal Air Force Base in northern England, one of the steps to allowing the missile shield. At the time, then-Defense Secretary Geoff Hoon said the U.K. would keep its options open about Britain taking the U.S. missile shield.”

Read more about the RAF Fylingdales base from Wikipedia

The final design for a “doomsday” vault that will house seeds from all known varieties of food crops has been unveiled by the Norwegian government.

“The Svalbard International Seed Vault will be built into a mountainside on a remote island near the North Pole. The vault aims to safeguard the world’s agriculture from future catastrophes, such as nuclear war, asteroid strikes and climate change.”

“There are, for instance, well over 100,000 distinct varieties of rice, compared to the 400 or so breeds of dog out there,” Cary Fowler, executive director of the Global Crop Diversity Trust, told LiveScience. “These represent all the options that crops have for developing in the future, the raw material for plant evolution.”

These distinct varieties may possess extraordinary and possibly unique traits in terms of taste, nutritional quality, pest and disease resistance, or adaptability to various environments. For example, some rice species can grow as much as 20 feet underwater, Fowler explained, or in semi-arid conditions.

KEKAHA, Hawaii (CNN) — The Pentagon’s Missile Defense Agency shot down a dummy target missile over the southern Pacific Ocean during a test of the U.S. missile defense shield early Saturday, according to an agency spokeswoman.

First, a dummy ballistic missile was fired from a U.S. mobile launch platform in the Pacific Ocean in a simulated attack.

Moments later, an interceptor missile was fired from the agency’s missile range facility on Hawaii’s Kauai Island and struck the dummy warhead over the Pacific Ocean, military footage showed.

The system “intercepts missiles that are shorter range and at the end of their flight trajectory. It is part of the ballistic missile defense system, a layered system that is designed to intercept all types of missiles in all phases of flights,” Rogers said.

After decades of investment, it looks like missile defense systems may actually be paying off. If they ever succeed in a real war scenario, they could save millions of lives and stablize the geopolitical situation. It’s always good to applaud the developments of defense technologies (for actual defense), even if they aren’t perfect.