NASA’s Marshall Space Flight Center has designed a nuclear-warhead-carrying spacecraft, that would be boosted by the US agency’s proposed Ares V cargo launch vehicle, to deflect asteroids.

The Ares V launch vehicle is scheduled to first fly in 2018. It would launch 130 tons to LEO.

I welcome this study for providing a clearer analysis of the deflection options and the analyzing costs of searching for threatening asteroids.

99942 Apophis is a near-Earth asteroid that caused a brief period of concern in December 2004 because initial observations indicated a relatively large probability that it would strike the Earth in 2029. It is 350 meters across and weighs about 46 million tons.

The study team assessed a series of approaches that could be used to divert a NEO potentially on a collision course with Earth. Nuclear explosives, as well as non-nuclear options, were assessed.
• Nuclear standoff explosions are assessed to be 10–100 times more effective than the non-nuclear alternatives analyzed in this study. Other techniques involving the surface or subsurface use of nuclear explosives may be more efficient, but they run an increased risk of fracturing the target NEO. They also carry higher development and operations risks.
• Non-nuclear kinetic impactors are the most mature approach and could be used in some deflection/mitigation scenarios, especially for NEOs that consist of a single small, solid body.
• “Slow push” mitigation techniques are the most expensive, have the lowest level of technical readiness, and their ability to both travel to and divert a threatening NEO would be limited unless mission durations of many years to decades are possible.
• 30–80 percent of potentially hazardous NEOs are in orbits that are beyond the capability of current or planned launch systems. Therefore, planetary gravity assist swingby trajectories or on-orbit assembly of modular propulsion systems may be needed to augment launch vehicle performance, if these objects need to be deflected. 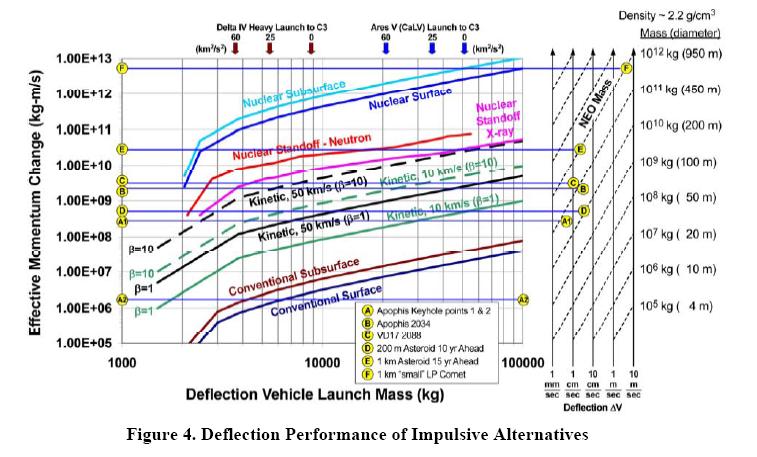 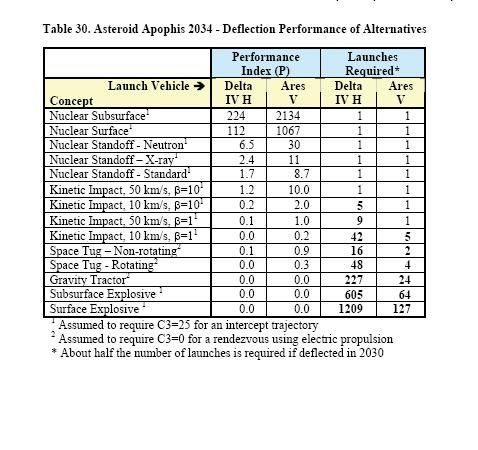 This is a table that shows that a performance index of 1 means a method was good enough to perform a successful deflection. Less than 1 means more launches are needed. 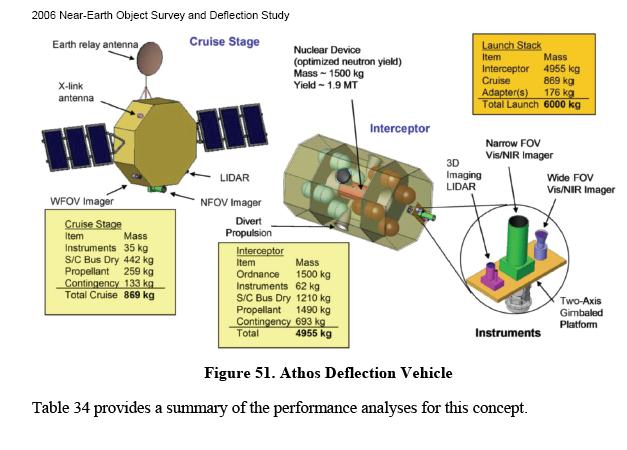 This is a drawing of the deflection vehicle

The Lifeboat foundation has the asteroid shield program

Using maps of population density, the researchers charted the places likely to suffer the most casualties from asteroids. As might be expected, countries with large coastal populations turned out to be most vulnerable, with China, Indonesia, India, Japan and the US in the top five spots.

The team focused on smaller asteroids because they hit the Earth more frequently. An asteroid a few hundred metres across hits the planet about once every 10,000 years, on average, while those larger than 1 kilometre hit only every 100,000 years or so. Small asteroids are also harder to spot. They considered a range of impact energies corresponding to asteroids between 100 and 500 metres across, striking with typical solar system speeds of about 20,000 kilometres per second.

Simulations show the asteroid impact locations that would produce the most casualties in red. The Pacific coast of Asia is a particularly deadly place for an asteroid to strike because of tsunamis, while a direct strike on some densely populated inland areas could also cause a heavy toll (Illustration: Nick Bailey et al/University of Southampton)

The US faced the worst potential economic losses, since it has a lot of infrastructure on coastlines facing two different oceans. China was second, followed by Sweden, Canada, and Japan.

The Lifeboat asteroid shield project helps to address these risks and Tsunami warning and response systems would also help mitigate loss of life from ocean impacts.

NASA estimates the cost to find at least 90 percent of the 20,000 potentially hazardous asteroids and comets by 2020 would be about $1 billion, according to a report NASA will release later this week. It would cost $300 million if a asteroid locating telescope was piggybacked on another vehicle. The report was previewed Monday at a Planetary Defense Conference in Washington.

The agency is already tracking bigger objects, at least 3,300 feet in diameter, that could wipe out most life on Earth, much like what is theorized to have happened to dinosaurs 65 million years ago. But even that search, which has spotted 769 asteroids and comets — none of which is on course to hit Earth — is behind schedule. It’s supposed to be complete by the end of next year.

A cheaper option would be to simply piggyback on other agencies’ telescopes, a cost of about $300 million, also rejected, Johnson said.

“The decision of the agency is we just can’t do anything about it right now,” he added.

Earth got a scare in 2004, when initial readings suggested an 885-foot asteroid called 99942 Apophis seemed to have a chance of hitting Earth in 2029. But more observations showed that wouldn’t happen. Scientists say there is a 1-in-45,000 chance that it could hit in 2036.

They think it would mostly likely strike the Pacific Ocean, which would cause a tsunami on the U.S. West Coast the size of the devastating 2004 Indian Ocean wave.

“You can’t deflect them if you can’t find them,” Logsdon said. “And we can’t find things that can cause massive damage.”

Lifeboat has an asteroid shield project

Graduate student (University of Alabama Huntsville) Blake Anderton wrote his master’s thesis on “Application of Mode-locked lasers to asteroid characterization and mitigation.” Undergraduate Gordon Aiken won a prize at a recent student conference for his poster and presentation “Space positioned LIDAR system for characterization and mitigation of Near Earth Objects.” And members of the group are building a laser system “that is the grandfather of the laser that will push the asteroids,” Fork said.

Anderton’s mode locked lasers could characterize asteroids up to 1 AU away (1.5 x 10 to the 11 meters). Arecibo and other radar observatories can only detect objects up to 0.1 AU away, so in theory a laser would represent a vast improvement over radar.

A one page powerpoint describes their asteroid detection and deflection approach About 12 of the 1AU detection volumes (around the sun in the asteroid belt) would be needed to cover the main areas for near earth asteroids.

40KW femtosecond lasers could deflect an asteroid the size of Apophis (320meters, would hit with 880 megaton force) given one year of illumination and an early start in the trajectory.

Asteroid shields are a project of the Lifeboat Foundation

A giant asteroid named Apophis has a one in 45,000 chance of hitting the Earth in 2036. If it did hit the earth it could destroy a city or a region. A slate of new proposals for addressing the asteroid menace was presented today at a recent meeting of the American Association for the Advancement of Science in San Francisco.

Edward Lu of NASA has proposed “gravitational tractor” is a spacecraft—up to 20 tons (18 metric tons)—that it could divert an asteroid’s path just by thrusting its engines in a specific direction while in the asteroid’s vicinity.

One, dubbed Pan-STARRS, is slated to begin operation later this year. The project will use an array of four 6-foot-wide (1.8-meter-wide) telescopes in Hawaii to scan the skies.

The other program, the Large Synoptic Survey Telescope in Chile, will use a giant 27.5-foot-wide (8.4-meter-wide) telescope to search for killer asteroids. This telescope is scheduled for completion sometime between 2010 and 2015.

David Morrison, an astronomer at NASA’s Ames Research Center, said that “the rate of discoveries is going to ramp up. We’re going to see discoveries being made at 50 to 100 times the current rate.”

“You can expect asteroids like Apophis [to be found] every month.”

Schweickart, the former astronaut, thinks the United Nations needs to draft a treaty detailing standardized international measures that will be carried out in response to any asteroid threat.

His group, the Association of Space Explorers, has started building a team of scientists, risk specialists, and policymakers to draft such a treaty, which will be submitted to the UN for consideration in 2009.

The New Scientist also has an article about how exploding robots could be sent to determine the composition of Near Earth Asteroids. This would be relevant in developing a proper Asteroid shield. A current project is the Lifeboat AsteroidShield 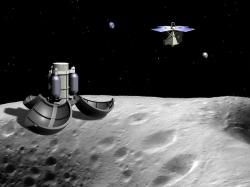 An illustration from Ball Aerospace and New Scientist.

The Ball Aerospace proposal of many small probes seems cost efficient and worthy of being advocated by the Lifeboat Foundation.