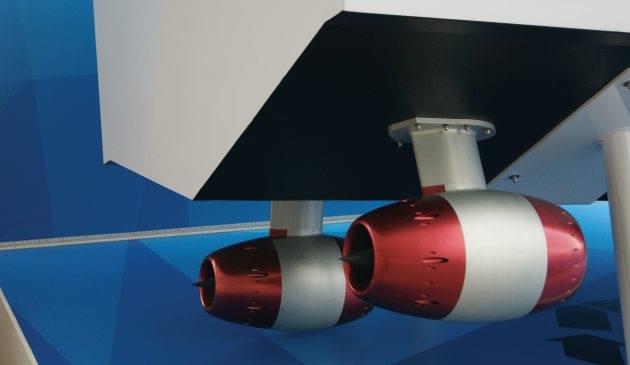 Italian start-up Sealence is promising dramatic gains in the speed and range of electric boats thanks to a radical new pod-shaped waterjet, reports Hugo Andreae.

Gobbo first proposed the idea back in 2007, using computer simulations to test its potential, before developing the first working prototype in 2010. However, it wasn’t until the arrival of Professor Ernesto Benini, an expert in fluid dynamics from the University of Padua, that its full potential started to be realised in 2016.

The team behind the project now comprises 21 different specialists including engineers, designers, hydrodynamicists and even a powerboat racer, who together form the parent company Sealence.

It’s no coincidence that the latest DeepSpeed prototype resembles the jet housing of an aeroplane engine as, like a turbofan, it is designed to funnel water (rather than air) in the front end and accelerate it out through a smaller nozzle at the back. However, instead of a central hub-mounted fan compressing it and combining it with burning fuel, the DeepSpeed jet uses impeller blades on a hubless revolving outer ring turned by a powerful electric motor.