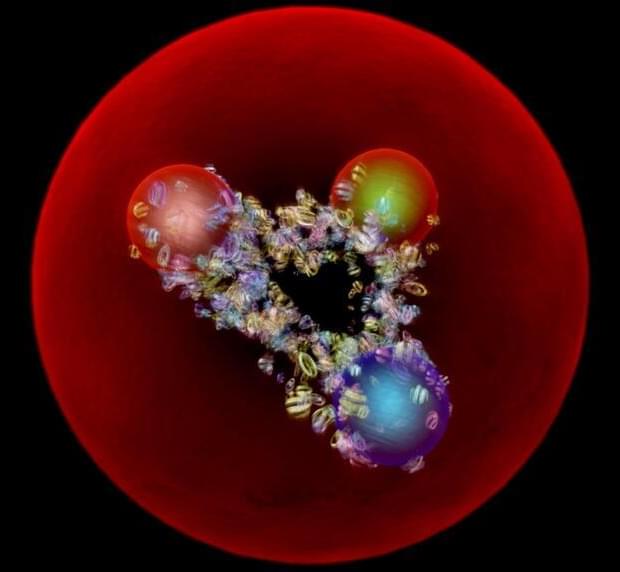 While the Large Hadron Collider (LHC) at CERN is well known for smashing protons together, it is actually the quarks and gluons inside the protons—collectively known as partons—that are really interacting. Thus, in order to predict the rate of a process occurring in the LHC—such as the production of a Higgs boson or a yet-unknown particle—physicists have to understand how partons behave within the proton. This behavior is described in parton distribution functions (PDFs), which describe what fraction of a proton’s momentum is taken by its constituent quarks and gluons.

Knowledge of these PDFs has traditionally come from lepton–proton colliders, such as HERA at DESY. These machines use point-like particles, such as electrons, to directly probe the partons within the proton. Their research revealed that, in addition to the well-known up and down valence quarks that are inside a proton, there is also a sea of quark–antiquark pairs in the proton. This sea is theoretically made of all types of quarks, bound together by gluons. Now, studies of the LHC’s proton–proton collisions are providing a detailed look into PDFs, in particular the proton’s gluon and quark-type composition.

The physicists at CERN’s ATLAS Experiment have just released a new paper combining LHC and HERA data to determine PDFs. The result uses ATLAS data from several different Standard Model processes, including the production of W and Z bosons, pairs of top quarks and hadronic jets (collimated sprays of particles). It was traditionally thought that the strange-quark PDF would be suppressed by a factor of ~2 compared to that of the lighter up-and down-type quarks, because of its larger mass. The new paper confirms a previous ATLAS result, which found that the strange quark is not substantially suppressed at small proton momentum fractions and extends this result to show how suppression kicks in at higher momentum fractions (x 0.05) as shown in Figure 1.