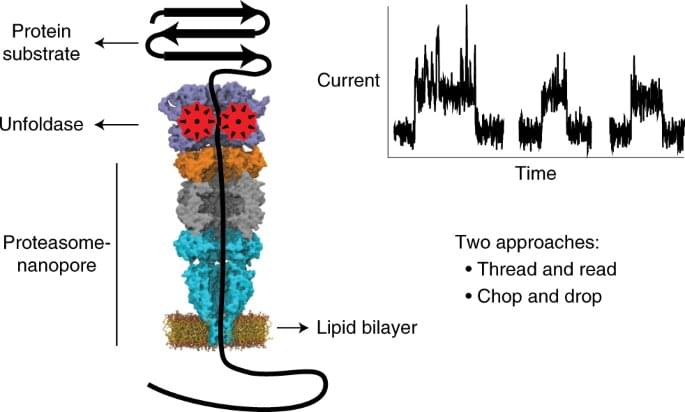 A team of researchers at the University of Groningen has developed a multicomponent nanopore machine that approaches single molecule protein sequencing—it uses a design that allows for unfolding, threading and degrading a desired protein. In their paper published in the journal Nature Chemistry, the group describes their nanopore machine, how it works and how close it comes to allowing single molecule protein sequencing. Yi-Lun Ying with Nanjing University has published a News & Views piece in the same journal issue outlining the purpose of macromolecular machines and the work done by the team with this new effort.

It has been a goal of chemists for many years to create a machine of some type that would allow easy analysis of individual protein molecules, similar to devices that have been created to sequence nucleic acids. Such efforts have been stymied by the high degree of complexity of protein molecules. In this new effort, the researchers have come close to achieving that goal. They have built a tiny (900 kDa) multicomponent nanopore machine that is capable of unfolding a given protein and then presenting it to a protein nanopore (a tiny cavity or pore).

The researchers built the machine by placing a chopper of sorts on top of material borrowed from a bacterium. The material works as a tunnel, directing bits from the chopper through a membrane that was designed to mimic the surface of a cell. The chopper breaks a protein into fragmented bits that are easily exported through the nanopore. As they do so, the fragments impact the flow of charged molecules, which leads to the generation of an electrical signal.