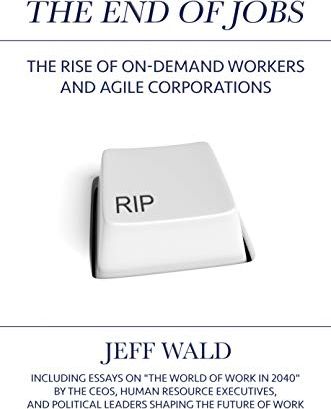 Author and entrepreneur Jeff Wald discusses his book “The End of Jobs: The Rise of On-Demand Workers and The Agile Corporation,” on the latest Seeking Delphi™ podcast. The conclusions may not be what you anticipate from the title…

“There’s a lot of automation that can happen that isn’t a replacement of humans but of mind-numbing behavior.” –Stewart Butterworth

“Automation is going to cause unemployment, and we better prepare for it.”–Mark Cuban

In an early standup routine, Woody Allen once joked that when his father came home to announce that his job on an assembly line was replaced by a 50-dollar part, what was really disturbing was that his mother immediately ran out and bought one of those parts. As funny as that may be, the potential loss of millions of jobs to automation is no joking matter. The fears of such abound as automation, robotics and artificial intelligence continue to invade the world of work. But the scenarios for the future of human employment may be far more nuanced than you might expect. In this episode of Seeking Delphi™ entrepreneur and author Jeff Wald discusses his view of the future of work, as outlined in his book The End of Jobs: The Rise of On-demand Workers and the Agile Corporation. You can subscribe to Seeking Delphi™ on Apple podcasts, PlayerFM, MyTuner, Listen Notes, and YouTube. You can also follow us on twitter @Seeking_Delphi and Facebook.