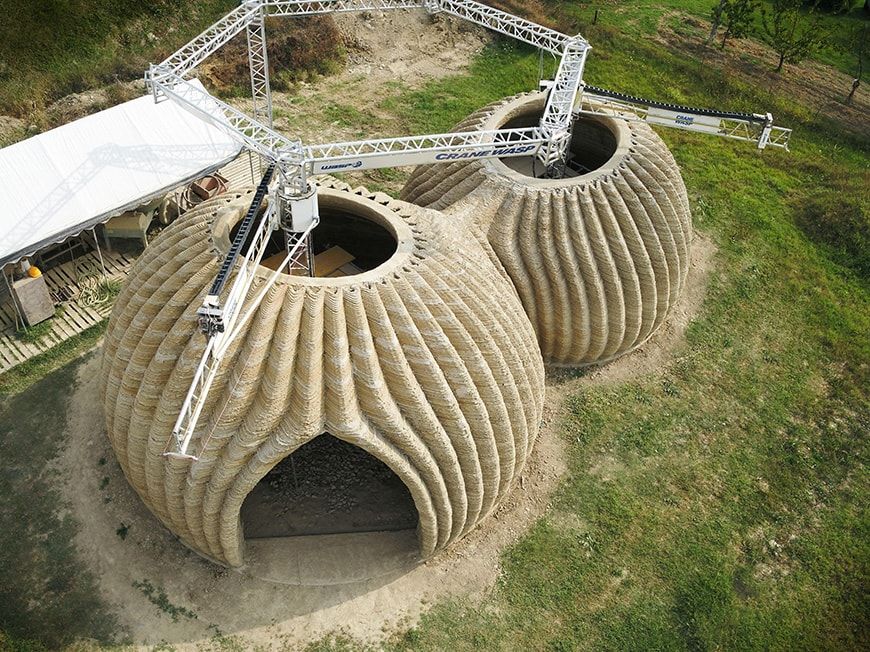 “TECLA (an acronym which stands for “Technology and Clay”) is a habitat consisting of two interconnected housing units, each covered by a semi-spherical dome. The units have been built using multiple Crane Wasp printing units operating simultaneously. Crane WASP is defined by the manufacturer as “a collaborative 3D printing system capable of printing houses” and can print various materials — such as earth-based materials, concrete mortar, and geopolymers — with a maximum speed of 300 mm/s and a maximum printing area of 50 sqm per unit. The design of the habitat features two or more “cocoon-like” housing units, whose shape vaguely resembles that of a sea urchin, in which structure, insulation, and finishes coincide. The thick raw earth walls of the units have a hollow structure consisting of several clay “waves”, which makes them at the same time relatively lightweight, resistant, and highly insulating. About 200 printing hours are required to build each unit, which consists of 350 clay layers, each 12 mm thick.”

Designed by Mario Cucinella and build by WASP, TECLA is a prototype house near Ravenna, Italy, made by 3D-printing a material based on locally-sourced clay.