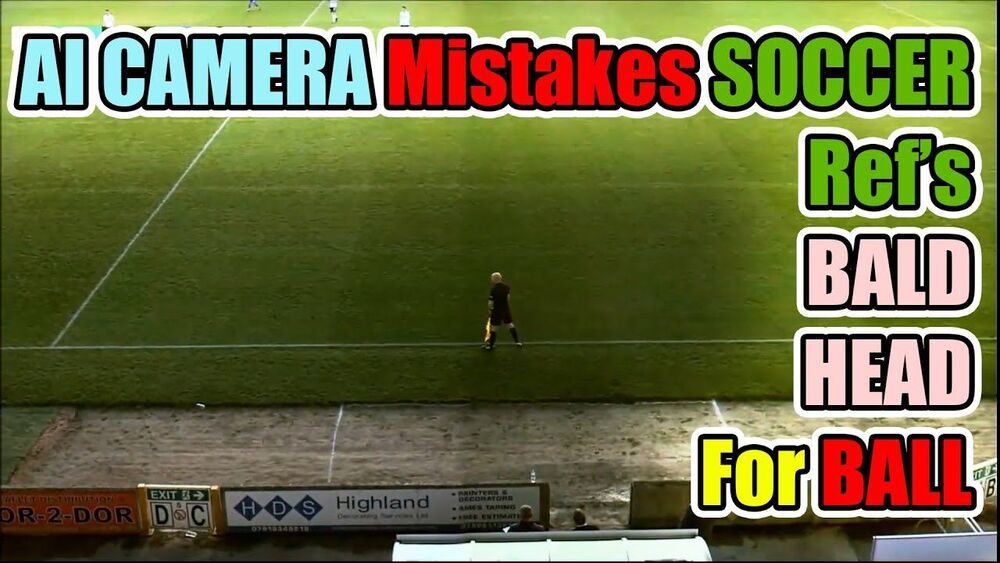 In this video, I’m going to talk about how an AI Camera Mistakes Soccer Ref’s Bald Head For Ball. Technology and sports have a fairly mixed relationship already. Log on to Twitter during a soccer match (or football as it’s properly known*) and as well as people tweeting ambiguous statements like “YESSS” and “oh no mate” to about 20,000 inexplicable retweets, you’ll likely see a lot of complaints about the video assistant referee (VAR) and occasionally goal-line technology not doing its job. Fans of Scottish football team Inverness Caledonian Thistle FC experienced a new hilarious technological glitch during a match last weekend, but in all honesty, you’d be hard-pressed to say it didn’t improve the viewing experience dramatically.

The club announced a few weeks ago it was moving from using human camera operators to cameras controlled by AI. The club proudly announced at the time the new “Pixellot system uses cameras with in-built, AI, ball-tracking technology” and would be used to capture HD footage of all home matches at Caledonian Stadium, which would be broadcast directly to season-ticket holders’ homes. The AI camera appeared to mistake the man’s bald head for the ball for a lot of the match, repeatedly swinging back to follow the linesman instead of the actual game. Many viewers complained they missed their team scoring a goal because the camera “kept thinking the Lino bald head was the ball,” and some even suggested the club would have to provide the linesman with a toupe or hat.

With no fans allowed in the stadium due to Covid-19 restrictions, the fans of Inverness Caledonian Thistle FC and their opponents Ayr United could only watch via the cameras, and so were treated to mostly a view of the linesman’s head instead of any exciting moments of the match that were occurring off-camera, though some fans saw this as a bonus given the usual quality of performance. The cognitive capabilities of current architectures are very limited, using only a simplified version of what intelligence is capable of. For instance, the human mind has come up with ways to reason beyond measure and logical explanations to different occurrences in life. What would have been otherwise straightforward, an equivalently difficult problem may be challenging to solve computationally as opposed to using the human mind. This gives rise to two classes of models: structuralist and functionalist. The structural models aim to loosely mimic the basic intelligence operations of the mind such as reasoning and logic. The functional model refers to the correlating data to its computed counterpart. The overall research goal of artificial intelligence is to create technology that allows computers and machines to function intelligently. The general problem of simulating (or creating) intelligence has been broken down into sub-problems. These consist of particular traits or capabilities that researchers expect an intelligent system to display. That’s all for today.