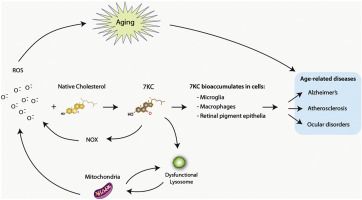 7-Ketocholesterol is a harmful oxidized byproduct of cholesterol, it is highly toxic with no redeeming qualities and serves no purpose in our bodies aside from allowing heart disease to develop. Check out Underdog Pharma’s recent review at Science Direct to learn more!

Oxidative stress has long been causatively implicated in the aging process [219,220]. As described in section 2, 7KC is the most common stable product of a reaction between cholesterol and a free radical. This is a vicious cycle as 7KC also leads to increased free radical production and release, seemingly by plasma membrane permeabilization. As discussed above, mitochondrial dysfunction and free-radical formation are also strongly implicated in the aging process and so while the precise mechanistic links between mitochondria, 7KC, and aging are still being elucidated they seem likely to be intertwined.

Is 7KC a biomarker of aging? As discussed in section 4, 7KC accumulation is directly implicated in many diseases of aging, including atherosclerosis, heart failure, AMD, NAFLD, and AD. It is thus reasonable to hypothesize that when otherwise unrelated diseases of aging share a common cause, that this cause is likely to be a part of the biological aging process. 7KC is known to accumulate in phagocytic cells such as macrophages (promoting the formation of foam cells), RPE cells, and microglia. It has also been suggested that c. elegans subjected to 7KC could be a good model of 7KC-dependent aging [221]. As 7KC is broadly toxic, and most cells seem to have difficulty metabolizing it, it may be that, with age, 7KC is bioaccumulating and impairing functional activity of the cells and tissue.

As described in Section 3, 7KC is a potent inhibitor of lysosomal function. Lysosomal dysfunction is part of the degenerative aging process and is implicated in the cause of diseases such as AMD, atherosclerosis, and AD in which accumulation of non-degradable biomolecules in the lysosome prevent phagocytic cells from efficiently metabolizing phagocytized biological material [91]. We therefore propose that 7KC plays an important role in the loss of function associated with aging and the lysosomal dysfunction produced by 7KC is a key mediator of this role. Thus, as argued in the previous sections, although diseases of aging present with disparate symptoms, a central element to many of the symptoms could be production and accumulation of 7KC. Despite the fact that the biological effects of 7KC have been studied since at least the 1940s, relatively little has been published quantifying intracellular 7KC levels in vivo with age.