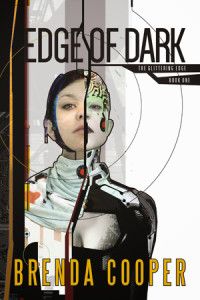 Edge of Dark is part space-opera, part coming-of-age story, and part exploration of the relationship between humans and the post-human descendants who may ultimately transcend them.

The book takes place in the same universe as Brenda Cooper’s “Ruby’s Song” books (The Creative Fire; The Diamond Deep). However, you don’t need to have read those books to enjoy this one. The story in Edge of Dark picks up decades after the earlier books.

The setting is a solar system in which the most Earth-like planet, once nearly ecologically destroyed, is now in large part a wilderness preserve, still undergoing active restoration. Most humans live on massive space stations in the inner solar system. A few live on smaller space stations a bit further out, closer to the proverbial “Edge”. And beyond that? Beyond that, far from the sun, dwell exiles, cast out long ago for violating social norms by daring to go too far in tinkering with the human mind and body.

As the story progresses, it becomes clear that those exiles have grown in strength and have become, in some cases, not just transhuman, but truly posthuman. What follows is a story that is rich in politics, and even more rich in plausible, fascinating, and nuanced tensions created by this juxtaposition of human and posthuman.

There are a tremendous number of stories out there that simple-mindedly posit post-humans as a grave threat and enemy to humanity. (Think “Terminator.”) There are others that take a view that human and post- or trans- human can all learn to get along. (Think “X-Men”.) Brenda Cooper has done something remarkable here: She’s given us a story that isn’t simple or moralistic. It’s complicated. At the beginning of the book, I expected a simple morality play with a specific outcome. Later, I changed my mind. Then I changed it again. What she’s presented is messy, just like real life. It’s wound up with politics, just like real life.

The early parts of the book introduce new characters and new settings. The later parts of the book are what grabbed me. In the end, I was extremely happy I read this. Edge of Dark is a unique view of the interaction of human and post-human in my experience. I recommend it highly.

Anyone who posts to the Lifeboat Foundation blog gets a chance to win a signed copy of Edge of Dark!

The deadline for the contest is June 30. If you need access to our blog, send an email with the subject of “Lifeboat Foundation blog” to [email protected].