MANDATE: Thou Shalt Sin In Favor Of Explosively-Nonlinear Victory For Eternity! 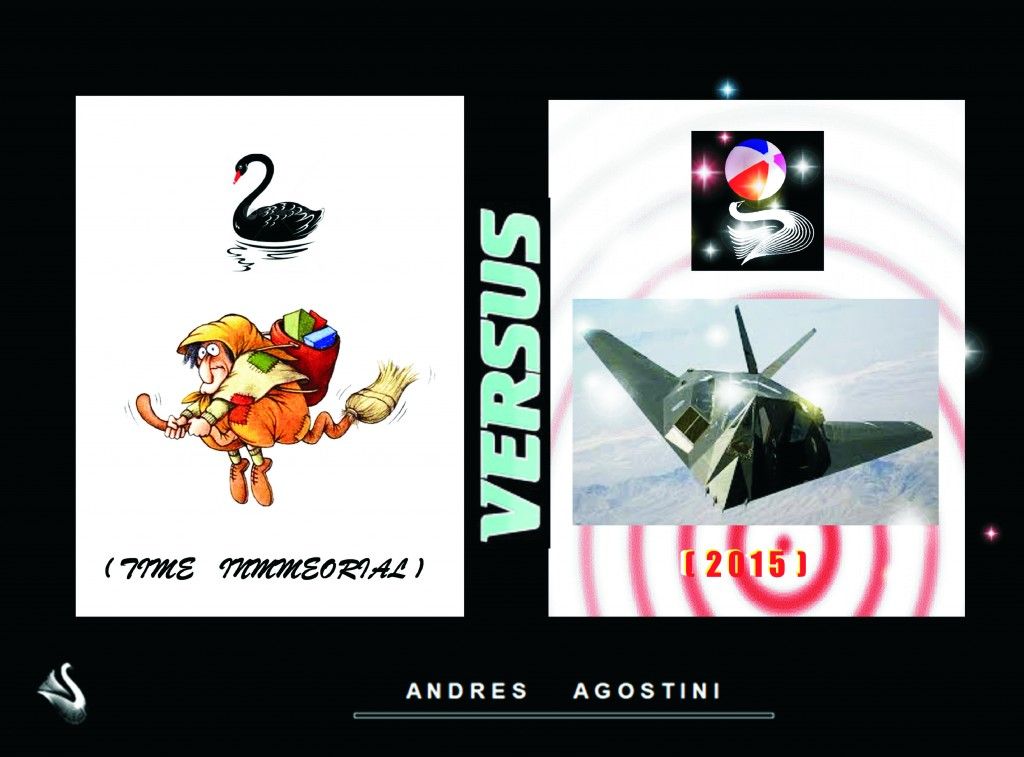 Thou Shalt Sin Against Linear Failure, In Order To Embrace Explosively-Nonlinear Victory For Eternity!

What to do against the item below?

Thou Shalt Sin Against Linear Failure, In Order To Embrace Auspicious Nonlinear Victory!

FIRST, LET US UNDERSTAND WHAT IT IS HAPPENING CONCERNING PERVASIVE CHANGE:

“… BEGINNING WITH THE AMOUNT OF KNOWLEDGE IN THE KNOWN WORLD AT THE TIME OF CHRIST, STUDIES HAVE ESTIMATED THAT THE FIRST DOUBLING OF THAT KNOWLEDGE TOOK PLACE ABOUT 1700 A.D. THE SECOND DOUBLING OCCURRED AROUND THE YEAR 1900. IT IS ESTIMATED TODAY THAT THE WORLD’S KNOWLEDGE BASE WILL DOUBLE AGAIN BY 2010 AND AGAIN AFTER THAT BY 2013 …”

AND TO UNDERPIN THE PRECEDING PARAGRAPH, LET US ALSO CONSIDER THE WORDS OF BILL GATES:

On Mar 24, 1999 Microsoft Chairman, and today’s smartest and wealthiest person, gave, in hard writing (ISBN: 978–0446525688), a pervasive forewarning that 96.357% of the people, with their intrinsically and un-salvageably linear and unprepared minds, utterly ignored.

THIS IS THE VERBATIM FOREWARNING:

AND MORE IMPORTANTLY, LET US CAREFULLY CONSIDER THIS:

3.-) “… BEGINNING WITH THE AMOUNT OF KNOWLEDGE IN THE KNOWN WORLD AT THE TIME OF CHRIST, STUDIES HAVE ESTIMATED THAT THE FIRST DOUBLING OF THAT KNOWLEDGE TOOK PLACE ABOUT 1700 A.D. THE SECOND DOUBLING OCCURRED AROUND THE YEAR 1900. IT IS ESTIMATED TODAY THAT THE WORLD’S KNOWLEDGE BASE WILL DOUBLE AGAIN BY 2010 AND AGAIN AFTER THAT BY 2013 …” [226]

6.-) “…The flattening of the world is going to be hugely disruptive to both traditional and developed societies. The weak will fall further behind faster. The traditional will feel the force of modernization much more profoundly. The new will get turned into old quicker. The developed will be challenged by the underdeveloped much more profoundly. I worry, because so much political stability is built on economic stability, and economic stability is not going to be a feature of the flat world. Add it all up and you can see that the disruptions and going to come faster and harder. No one is immune — not me, not you, not Microsoft. WE ARE ENTERING AN ERA OF CREATIVE DESTRUCTION ON STEROIDS. Dealing with flatism is going to be a challenge of a whole new dimension even if your country has a strategy. But if you don’t have a strategy at all, well, again, you’ve warned…” [226]

WHAT TO DO ABOUT? EXACTLY THIS:

(5.-) Far-sight beyond the mind’s intangible exoskeleton.

(7.-) Reverse-engineering a gene and a bacterium or, better yet, the lucrative genome.

(10.-) Project your wisdom’s wealth onto communities of timeless-connected wikis.

(12.-) Organize relationships into voluntary associations that are mutually beneficial and accountable for contributing productively to the surrounding community.

(13.-) Practice the central rule of good strategy, which is to know and remain true to your core business and invest for leadership and R&D+Innovation.

(14.-) Kaizen, SixSigma, Lean, LeanSigma, “…Reliability Engineer…” (the latter as solely conceived and developed by Procter & Gamble and Los Alamos National Laboratories) it all unthinkably and thoroughly by recombinant, a là Einstein Gedanke-motorized judgment (that is to say: Einsteinian Gedanke [“…thought experiments…”].

(15.-) Provide a road-map and blueprint for drastically compressing (‘crashing’) the time’s ‘reticules’ it will take you to get on the top of your tenure, nonetheless of your organizational level.

(16.-) With the required knowledge and relationships embedded in organizations, create support for, and carry out transformational initiatives.

(17.-) Offer a tested pathway for addressing the linked challenges of personal transition and organizational transformation that confront leaders in the first few months in a new tenure.

(19.-) Institute coalitions that translate into swifter organizational adjustments to the inevitable streams of change in personnel and environment.

(20.-) Mobilize and align the overriding energy of many others in your organization, knowing that the “…wisdom of crowds…” is upfront and outright rubbish.

IS THAT YOUR BEST?

(21.-) Step outside the boundaries of the framework’s system when seeking a problem’s solution.

(22.-) Within zillion tiny bets, raise the ante and capture the documented learning through frenzy execution. (23) “…Moonshine…” and “… Skunkworks …” and “…Re-Imagineer…” it all, holding in your mind the motion-pictured image that, regardless of the relevance of “…inputs…” and “…outputs,…”, entails that the highest relevance is within the sophistication within the THROUGHPUT.

(26.-) Combine the practical and technological with the mysterious and meaningful.

(31.-) Facilitate a heterogeneous group — in the midst of appalling interpersonal chemistry — towards the accomplishment of a common goal.

(35.-) Acculturate your brain to operate executions from the applied omniscience via the lenses and springs of systems methodology.

(36.-) Manage RISKS and BENEFITS and CHANCES and OPPORTUNITIES in series and never in parallel.

(37.-) Remove accident causes prior to a loss, knowing that an accident is never a random stroke of fate, but an utter and thus purported instrument of ignorance of supine ignorance.

(38.-) Convert your viewpoint to a systems approach.

(39.-) Enable full-orbed and balanced stability of your thinkables and unthinkables.

(43.-) Build your own FUTURE transcending your past.

(44.-) Contort your mindful, mindless executions — and those in the midst of ‘mindful’ and ‘mindless’ executions —, solely out of this world, and solely out of this universe, and solely out of this reality, but not just for the inexpensive, tangential, impious sake of intellectual stunts, but only so that the ‘life’ has not unfruitful ‘afterlife’ — so-called —, and also so that the ‘world’ has no ‘afterworld’ (as well as, in congruence with the present work, ‘after-universe’ and even ‘after-verse.’) — so-called —. Aren’t afterlife and afterworld dis-intermediated anyway? Now, you, and merely you, proceed and transcend yourself, by yourself and for yourself.

(45.-) If you really want to make an operational difference in your professional theater of operations, go and get a full immersion in the fringe. Right in there, under that tense and pressing dynamics, you’ll have the vantage flux of the mirage.

(47.-) ‭De-realize, thus, de-focus from that taken-for-granted realities of the folly and the faulty, literally!

(49.-) Assure that there are not un-searched areas of risk, benefit and sustainable opportunity.

(59.-) Acculturate yourself and those in your crew and in the orbit of incumbent stakeholders with most actionable, applied omniscience. Remember culture without science and technology is beyond blind.

(61.-) Achieve next-level breakthrough in productivity, innovation and leadership in the marketplace and society.

(62.-) Develop the internal power and moral authority to break out of those problems to become a significant force in solving them.

(63.-) Use your voice and deeds to superbly serve your organization’s purposes, functions and stakeholders.

(65.-) Take a prior learning for Life, apply it to a new situation, learn from practical experience, and apply the new learning.

(66.-) Pervasively reason from effect to cause and from cause to effect.

(67.-) Envision shrewd yet calculated risks, from start to end, to turn downsides into upsides.

(68.-) “…Exponentialize the rushed and marshaled progression of your own all-rounded, perennial learning curves on the doubles, chiefly those directly concerned with engaging your diverse skills, dexterities, and talents to overcome — through fluid execution by mind preparedness — your theater of operations because of and by the increasingly threatening surroundings. Otherwise, the onset Technological Revolutions (compounded in a pervasive composite), as explained in «Futuretonium and Futureketing», will give you the hardest time to you and yours. There is realistic and austere hope if we work the hardest and in the most scientific mode.

(69.-) Figure out exactly which genes and neurons coalesce to make synapses with.

(72.-) Don’t juts copy Nature but focus on copying Biology, Nature and the Omniverse.

(73.-) Transfer the Heritage Business or the Legacy Business into the Third Millennium.

(78.-) Combine the best features of the three breathtaking strategies into one.

(80.-) Learn to recognize situations in which mistakes are likely and try harder to avoid significant mistakes when the stakes are high.

(82.-) Challenge yourself to question every assumption.

(83.-) Keep the acceleration going, keep your world changing and off balance.

(84.-) Remember, the frozen image is false. The reality is continual motion.

(85.-) Trigger domino effects and change the way the economy behaves.

(86.-) Foreshorten product life cycles from years to months or even weeks or hours.

(88.-) Constantly challenge your business model; consider how you might transform your industry before others do it. “Not paying attention is even a bigger risk. Executives in music, newspapers, and equity trading have already seen the radical upheavals that digital business model reinvention can bring to their industries.”

(89.-) Get familiar with new digital practices that can be an opportunity or a threat to your industry and company.

(90.-) Identify bottlenecks or headaches — in your company and in your customers — that resulted from the limits of old technologies, and consider how you might resolve these problems digitally.

(91.-) Craft a compelling digital vision, one that specifies both intent and outcome. “There is no single best way to express a vision for digital transformation. It’s not a formulaic process,” the authors state. “You need to craft a vision that builds on your strengths, engages employees, and evolves over time.”

(92.-) Make your digital vision specific enough to give employees a clear direction, while giving them the flexibility to build on it.

(93.-) Open up the conversations to give everyone a role in digital transformation, and deal with resistance by being open and transparent about the goals.

(94.-) Consider which digital decisions must be governed at the highest levels of the company, and which will be delegated to lower levels.

(95.-) Focus your initial investments on getting a clean, well-structured digital platform; it’s the foundation for everything else.

(96.-) Challenge yourself continually to find new things you can do with your IT-business relationships, digital skills, and digital platform.

TO THE EXPRESS PURPOSE, IT MUST BE INCESSANTLY ACKNOWLEDGED FOR LIFE:

As well as Andres, Egotistical Prima Donna (SkunkWorks practitioner) is no longer a captive to history.

As well as Andres, Egotistical Prima Donna (SkunkWorks practitioner) is no longer a vassal in a faceless bureaucracy, he, she is an activist, not a drone.

As well as Andres, Egotistical Prima Donna (SkunkWorks practitioner) is no longer a foot soldier in the march of progress.

As well as Andres, Egotistical Prima Donna (SkunkWorks practitioner) is a Revolutionary! … ”

TODAY, I GOT THIS FROM LOCKHEED MARTIN RESEARCH SCIENTIST:

“ … Many businesses think today’s world is complicated and with technology rapidly changing, trying to figure out all the correct things to do is impossible, that it is better to just do what can be done, and adjust things when the result happens to be what is not expected. This is simply gambling where the odds for success and the liability of failure are getting worse by the day. The truth is the world is not complicated, just complex, and with complexity increasing at the same time technology is rapidly changing, the combination of the two conditions only seems complicated. The difference between complexity and complication is complexity can be logically addressed and accounted for such that proper risk management can then be applied and when the quality of the technology is assured early in the planning, analysis and design of the technical solution instead of only assuring it late in the development cycle, the integrated combination of these two scientifically validated methodologies can be used to reliably predict the expected outcomes. There is nobody better at applying the integrated combination of risk management and quality assurance than Mr. Andres Agostini or is there anybody that has more real world experience in doing so, and this includes solving some of the most wicked problems of some of the largest businesses throughout the world. If you are just gambling things work out, then I highly recommend you stop doing business dangerously and seek the assistance of Andres, the master of risk management and quality assurance, as well as reliability and contiguous process improvement…” 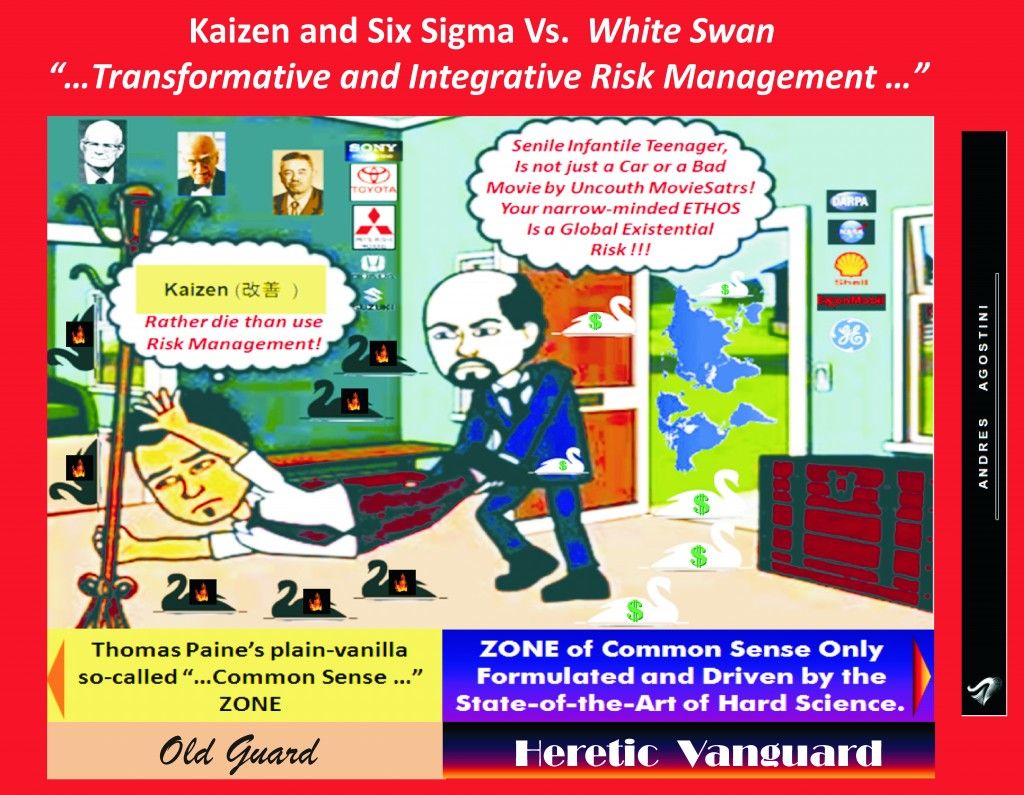