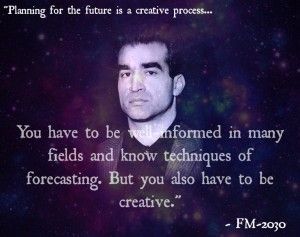 This archive file was compiled from audio of a discussion futurist FM 2030 held at the University of California, February 6th, 1994. In this discussion 2030 laid out an overview of his ‘transhuman’ philosophy and held a back and forth with other people present in the discussion. Discussion and debate included items such as the value of researching ‘indefinite lifespan’ technologies directly as opposed to (or in addition to) more traditional approaches, such as researching cures for specific diseases.
The excerpts in this archive file present a sort of thesis of FM 2030’s transhuman ideas.

About FM 2030: FM 2030 was at various points in his life, an Iranian Olympic basketball player, a diplomat, a university teacher, and a corporate consultant. He developed his views on transhumanism in the 1960s and evolved them over the next thirty-something years. He was placed in cryonic suspension July 8th, 2000. For more information about FM 2030, view the GPA Archive File: ‘Introduction to FM 2030′ or visit some of the following links: