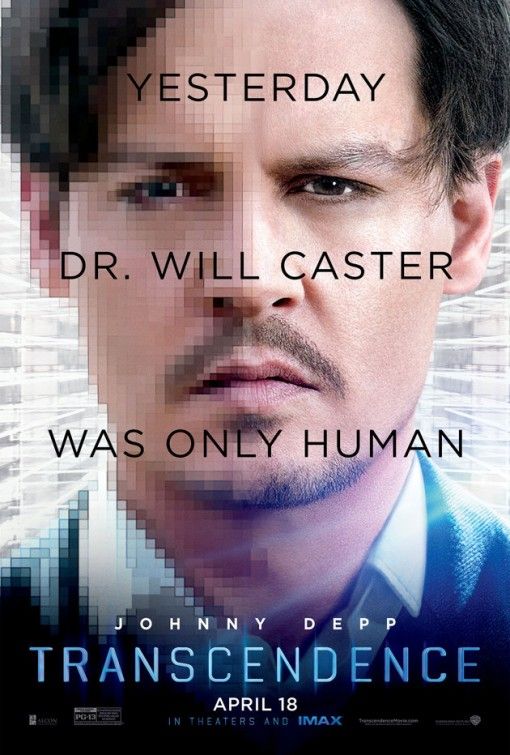 I recently saw the film Transcendence with a close friend. If you can get beyond Johnny Depp’s siliconised mugging of Marlon Brando and Rebecca Hall’s waddling through corridors of quantum computers, Transcendence provides much to think about. Even though Christopher Nolan of Inception fame was involved in the film’s production, the pyrotechnics are relatively subdued – at least by today’s standards. While this fact alone seems to have disappointed some viewers, it nevertheless enables you to focus on the dialogue and plot. The film is never boring, even though nothing about it is particularly brilliant. However, the film stays with you, and that’s a good sign. Mark Kermode at the Guardian was one of the few reviewers who did the film justice.

The main character, played by Depp, is ‘Will Caster’ (aka Ray Kurzweil, but perhaps also an allusion to Hans Castorp in Thomas Mann’s The Magic Mountain). Caster is an artificial intelligence researcher based at Berkeley who, with his wife Evelyn Caster (played by Hall), are trying to devise an algorithm capable of integrating all of earth’s knowledge to solve all of its its problems. (Caster calls this ‘transcendence’ but admits in the film that he means ‘singularity’.) They are part of a network of researchers doing similar things. Although British actors like Hall and the key colleague Paul Bettany (sporting a strange Euro-English accent) are main players in this film, the film itself appears to transpire entirely within the borders of the United States. This is a bit curious, since a running assumption of the film is that if you suspect a malevolent consciousness uploaded to the internet, then you should shut the whole thing down. But in this film at least, ‘the whole thing’ is limited to American cyberspace.

Before turning to two more general issues concerning the film, which I believe may have led both critics and viewers to leave unsatisfied, let me draw attention to a couple of nice touches. First, the leader of the ‘Revolutionary Independence from Technology’ (RIFT), whose actions propel the film’s plot, explains that she used to be an advanced AI researcher who defected upon witnessing the endless screams of a Rhesus monkey while its entire brain was being digitally uploaded. Once I suspended my disbelief in the occurrence of such an event, I appreciate it as a clever plot device for showing how one might quickly convert from being radically pro- to anti-AI, perhaps presaging future real-world targets for animal rights activists. Second, I liked the way in which quantum computing was highlighted and represented in the film. Again, what we see is entirely speculative, yet it highlights the promise that one day it may be possible to read nature as pure information that can be assembled according to need to produce what one wants, thereby rendering our nanotechnology capacities virtually limitless. 3D printing may be seen as a toy version of this dream.

Now on to the two more general issues, which viewers might find as faults, but I think are better treated as what the Greeks called aporias (i.e. open questions):

(1) I think this film is best understood as taking place in an alternative future projected from when, say, Ray Kurzweil first proposed ‘the age of spiritual machines’ (i.e. 1999). This is not the future as projected in, say, Spielberg’s Minority Report, in which the world has become so ‘Jobs-ified’, that everything is touch screen-based. In fact, the one moment where a screen is very openly touched proves inconclusive (i.e. when, just after the upload, Evelyn impulsively responds to Will being on the other side of the interface). This is still a world very much governed by keyboards (hence the symbolic opening shot where a keyboard is used as a doorstop in the cyber-meltdown world). Even the World Wide Web doesn’t seem to have the prominence one might expect in a film where computer screens are featured so heavily. Why is this the case? Perhaps because the script had been kicking around for a while (which is true). This may also explain why in Evelyn’s pep talk to funders includes a line about Einstein saying something ‘nearly fifty years ago’. (Einstein died in 1955.) Or, for that matter, why the FBI agent (played by Irish actor Cillian Murphy) looks like something out of a 1970s TV detective series, the on-site military commander looks like George C. Scott and the great quantum computing mecca is located in a town that looks frozen in the 1950s. Perhaps we are seeing here the dawn of ‘steampunk’ for the late 20th century.

(2) The film contains heavy Christian motifs, mainly surrounding Paul Bettany’s character, Max Waters, who turns out to be the only survivor of the core research team involved in uploading consciousness. He wears a cross around his neck, which pops up at several points in the film. Moreover, once Max is abducted by RIFT, he learns that his writings querying whether digital uploading enhances or obliterates humanity have been unwittingly inspirational. Max and Will can be contrasted in terms of where they stand in relation to the classic Faustian bargain: Max refuses what Will accepts (quite explicitly, in response to the person who turns out to be his assassin). At stake is whether our biblically privileged status as creatures entitles us to take the next step to outright deification, which in this case means merging with the source of all knowledge on the internet. To underscore the biblical dimension of dilemma, toward the end of the film, Max confronts Evelyn (Eve?) with the realization that she was the one who nudged Will toward this crisis. Yet, the film’s overall verdict on his Faustian fall is decidedly mixed. Once uploaded, Will does no permanent damage, despite the viewer’s expectations. On the contrary, like Jesus, he manages to cure the ill, and even when battling with the amassed powers of the US government and RIFT, he ends up not killing anyone. However, the viewer is led to think that Will 2.0 may have overstepped the line when he revealed his ability to monitor Evelyn’s thoughts. So the real transgression appears to lie in the violation of privacy. (The Snowdenistas would be pleased!) But the film leaves the future quite open, as what the viewer sees in the opening and final scenes looks more like the result of an extended blackout (and hints are given that some places have already begun the restore their ICT infrastructure) than anything resembling irreversible damage to life as we know it. One can read this as either a warning shot to greater damage ahead if we go down the ‘transcendence’ route, or that such a route might be worth pursuing if we get manage to sort out the ‘people issues’. Given that Max ends the film by eulogising Will and Evelyn’s attempts to benefit humanity, I read the film as cautiously optimistic about the prospects for ‘transcendence’, where the film’s plot is taken as offering a simulated trial run.

My own final judgement is that this film would be very good for classroom use to raise the entire range of issues surrounding what I have called ‘Humanity 2.0’.