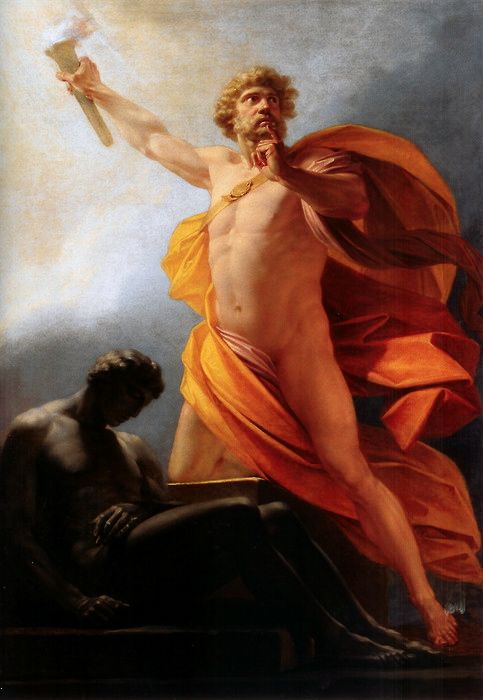 All religions have points of agreement concerning human toil and its relationship to the divine. This essay considers some of the Biblical and Hellenic parables of human origin, specifically the origins of human knowledge and instrumentality.

Here I want to present how knowledge and instrumentality are reported to originate with an act of mischief, specifically the theft of a divine artifact. My argument is that, although the possession of knowledge may be seen as a sin to be atoned for, the kind of atonement originally promoted may have simply been for us to apply our knowledge constructively in our lives. The concept of atoning for original sin (whether it is the Biblical or Hellenic sin) can then be justified with secular arguments. Everyone can agree that we retain the capacity for knowledge, and this means our atonement for the reported theft of such knowledge would simply rest with the use of the very same tool we reportedly stole.

The story of the titan Prometheus, from ancient Greek mythology, has been interpreted and reinterpreted many times. A great deal of writers and organizations have laid claim to the symbolism of Prometheus, including in modern times. [1] I would argue that too many writers diluted and over-explored the meaning of the parable by comparing everything to it, although this is not the focus of my essay. Greek mythology is notably weak on the subject of “good and evil” because it predates the Judeo-Christian propagation of their dualism, and this means most of the characters in Greek mythology can be defended or condemned without violating Hellenic theology. Prometheus as a mythic figure could be condemned from a Christian standpoint, because he seems strikingly similar to other scriptural characters engaged in a revolt against the divine. Yet the spirit of Prometheus and his theft has also been endorsed by people and organizations, such as the transhumanists who see him as an expression of the noblest human aspirations. [2]

The widely repeated version of the Prometheus story holds that Prometheus was a titan, a primordial deity who literally stole a sample of fire from Olympus and handed it down to humans. Prometheus was subsequently punished by the gods, who nailed him to a mountain and trapped him in a time-loop so that an eagle repeatedly ate his liver before it was regenerated to be eaten yet again. However, contrary to popular belief, the Prometheus parable is not mainly about the theft of fire but about the creation of the first man. According to Apollodorus’ Library dating from the First or Second Century AD:

“After he had fashioned men from water and earth, Prometheus also gave them fire, which he had hidden in a fennel stalk in secret from Zeus. But when Zeus learned of it, he ordered Hephiastos to nail his body to Mount Caucasos (a mountain that lies in Scythia). So Prometheus was nailed to it and held fast there for a good many years; and each day, an eagle swooped down to feed on the lobes of his liver, which grew again by night. Such was the punishment suffered by Prometheus for having stolen the fire, until Heracles later released him, as we shall show in our account of Heracles.” [3]

Immediately, you may be eager to identify the differences between this account of humanity’s creation and the Abrahamic accounts. For example, man is created by the thief, Zeus punishes the thief rather than man (it may seem), and the punishment of the thief is not portrayed as good, because ultimately the hero Heracles is destined to set Prometheus free again. However, the similarities are striking. Mankind is believed, in this parable, to be a source of trouble for the gods because mankind’s unique power derives from the violation and theft of divine power. We also encounter the apparent responsibility of women for the release of evil, found in the parable of Pandora, noted in the Library as being described by Hesiod as a “beautiful evil.” [4] Pandora (meaning women) was inflicted on men as the punishment for their possession of fire, which directly connects the tale of Pandora with the tale of Prometheus. We may speculate that Hesiod’s Pandora story contributed misogyny in the way some have argued that the Genesis account justifies misogyny. [5] However, such misogyny would defy the notion that Pandora, unlike men, was created by the gods [6] and was not punished by them…

The whole article has been reprinted at CLUBOF.INFO

Originally published on March 4 in OCRT