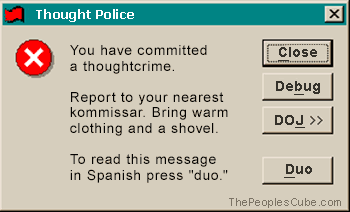 The increasing detail at which human brains can be scanned is bringing the possibility of mind-reading appliances closer and closer. Such appliances, when complete, will be non-invasive and capable of responding to our thoughts as easily as they respond to keys on a keyboard. Indeed, as emphasized in the Lifeboat Foundation’s 2013 publication, The Human Race to the Future, there may soon be appliances that are operated by thought alone, and such technology may even replace our keyboards.
It is not premature to be concerned about possible negative outcomes from this, however positive the improvement in people’s lifestyles would be. In mind-reading appliances, there are two possible dangers that become immediately obvious.

Brain-machine interfaces have many possibilities that deserve to be explored by science. However, there are also potentially dystopian threats presented by this technology. Even technologies like personal computers, which were seen as liberating to the individual and not aligned with powerful governments, have also become windows that regimes can use to spy on their citizens.

If hardware eventually allows words to appear on screens simply because of a thought, and the appliances are still vulnerable to hacking or government pressure, does this mean minds can be read without consent? It is very likely that any technology sensitive enough to respond to our thoughts could be programmed by a regime to intercept our thoughts. Even if our hardware was not originally designed to intercept thoughts on behalf of the authorities, the hardware would already meet the requirements for any program written to intercept thoughts for policing and political repression.

The potential negative consequences of mind-reading technology are equivalent to those of “uploading”, the futuristic concept of transferring one’s mind to computers as popularized by Singularitarians, usually following the ideas of Ray Kurzweil. There is a real threat that a technological singularity, as depicted in Kurzweil’s The Singularity is Near, could strengthen a flawed social system by giving the authorities the intrusive ability to monitor what it sees as deviant or threatening thought.

It may be that manual or verbal control, still depicted in science fiction as gifts that will be with us for many centuries and taken with humanity’s distant descendants to the stars, are just more practical than mind-reading. Even when limited to practical uses like controlling a vehicle or appliance, mind-reading may simply be destined to take away convenience rather than create convenience for the vast majority of its customers.

Even if driving a car by thought can be made safe, the use of aircraft or weapons systems via mind-reading would certainly be more problematic. When the stakes are high, most of us already agree that it is best not to entrust the responsibility to one person’s thoughts. By not using the body and voice when performing a task, and by not allowing others to intervene in your actions, the chances of an accident are probably always going to be raised. Although we like to think of our own brains as reliable and would probably be eager to try out mind-reading control over our vehicles, we do not think of others peoples’ brains that way, and would be troubled by the lack of any window for intervention in the other person’s actions.

Possible accidents when piloting a complex machine like a helicopter or manning a dangerous weapon may be averted by an experienced hand preventing someone from taking the wrong action. Considering this, old-fashioned manual controls may already be destined to be superior to any mind-reading controls and more attuned to the challenges faced by humans. We evolved to talk and physically handle challenges. Given this fact, removing all the remaining physical challenges of performing a task may only complicate your ability to perform effectively, or result in a higher tendency to err or take rash actions by subverting the ability of others to challenge you as you act.

Recommendation: we should avoid strengthening an undesirable social system

I hope that these objections to mind-reading may be proven invalid, with time. It is certainly likely that some people, such as those with physical disabilities, are going to rely on improvements in mind-reading technology to restore their lives. However, there has been, and continues to be, a very definite danger that a flawed social system and government are going to seek out technologies that can make them more and invulnerable, and this is one such technology. Any potential avenue of invulnerability of governments against their critics is unacceptable and should be challenged, just as the present excess in surveillance has been challenged.

It is important to keep reiterating that it is not the technology itself that is the source of a threat to humanity, but the myopic actions of the likely operators of that technology. Given the experience of government mass espionage, which began without the knowledge or consent of the public, concerns about other unannounced programs exploiting communication technology for “total information awareness” (TIA) are justified.