When examining the delicate balance that life on Earth hangs within, it is impossible not to consider the ongoing love/hate connection between our parent star, the sun, and our uniquely terraqueous home planet.

On one hand, Earth is situated so perfectly, so ideally, inside the sun’s habitable zone, that it is impossible not to esteem our parent star with a sense of ongoing gratitude. It is, after all, the onslaught of spectral rain, the sun’s seemingly limitless output of charged particles, which provide the initial spark to all terrestrial life.

Yet on another hand, during those brief moments of solar upheaval, when highly energetic Earth-directed ejecta threaten with destruction our precipitously perched technological infrastructure, one cannot help but eye with caution the potentially calamitous distance of only 93 million miles that our entire human population resides from this unpredictable stellar inferno. 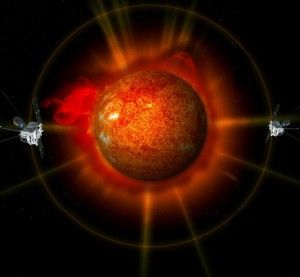 On 6 February 2011, twin solar observational spacecraft STEREO aligned at opposite ends of the sun along Earth’s orbit, and for the first time in human history, offered scientists a complete 360-degree view of the sun. Since solar observation began hundreds of years ago, humanity has had available only one side of the sun in view at any given time, as it slowly completed a rotation every 27 days. First launched in 2006, the two STEREO satellites are glittering jewels among a growing crown of heliophysics science missions that aim to better understand solar dynamics, and for the next eight years, will offer this dual-sided view of our parent star.

In addition to providing the source of all energy to our home planet Earth, the sun occasionally spews from its active regions violent bursts of energy, known as coronal mass ejections(CMEs). These fast traveling clouds of ionized gas are responsible for lovely events like the aurorae borealis and australis, but beyond a certain point have been known to overload orbiting satellites, set fire to ground-based technological infrastructure, and even usher in widespread blackouts.

CMEs are natural occurrences and as well understood as ever thanks to the emerging perspective of our sun as a dynamic star. Though humanity has known for centuries that the solar cycle follows a more/less eleven-year ebb and flow, only recently has the scientific community effectively constellated a more complete picture as to how our sun’s subtle changes effect space weather and, unfortunately, how little we can feasibly contend with this legitimate global threat.

The massive solar storm that occurred on 1 September 1859 produced aurorae that were visible as far south as Hawai’i and Cuba, with similar effects observed around the South Pole. The Earth-directed CME took all of 17 hours to make the 93 million mile trek from the corona of our sun to the Earth’s atmosphere, due to an earlier CME that had cleared a nice path for its intra-stellar journey. The one saving grace of this massive space weather event was that the North American and European telegraph system was in its delicate infancy, in place for only 15 years prior. Nevertheless, telegraph pylons threw sparks, many of them burning, and telegraph paper worldwide caught fire spontaneously.

Considering the ambitious improvements in communications lines, electrical grids, and broadband networks that have been implemented since, humanity faces the threat of space weather on uneven footing. Large CME events are known to occur around every 500 years, based on ice core samples measured for high-energy proton radiation.

The CME event on 14 March 1989 overloaded the HydroQuebec transmission lines and caused the catastrophic collapse of an entire power gird. The resulting aurorae were visible as far south as Texas and Florida. The estimated cost was totaled in the hundreds of million of dollars. A later storm in August 1989 interfered with semiconductor functionality and trading was called off on the Toronto stock exchange. 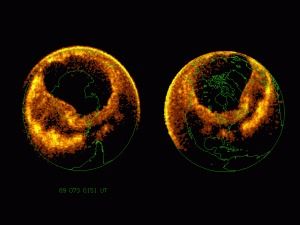 Beginning in 1995 with the launch and deployment of The Solar Heliospheric Observatory (SOHO), through 2009 with the launch of SDO, the Solar Dynamics Observatory, and finally this year, with the launch of the Glory science mission, NASA is making ambitious, thoughtful strides to gain a clearer picture of the dynamics of the sun, to offer a better means to predict space weather, and evaluate more clearly both the great benefits and grave stellar threats.

Earth-bound technology infrastructure remains vulnerable to high-energy output from the sun. However, the growing array of orbiting satellites that the best and the brightest among modern science use to continually gather data from our dynamic star will offer humanity its best chance of modeling, predicting, and perhaps some day defending against the occasional outburst from our parent star.